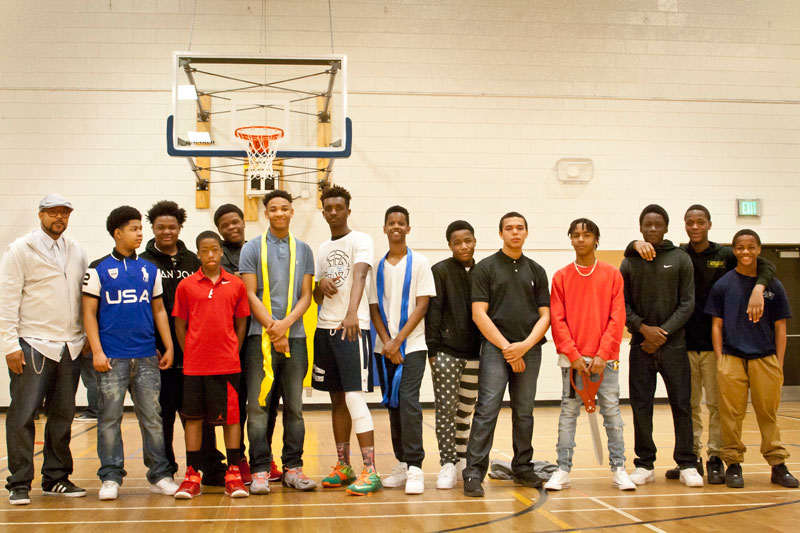 The group of Murray eighthgraders, led by New Lens mentor Roosevelt Mansfield, earned a grant to cover the cost and installation of the backboards, which replaced two worn and dented boards that were more than two decades old. They were the same boards that one New Lens member’s dad played on in the 1990s.

The old boards were an eyesore when basketball teams came from other schools to play at Murray, Mansfield said. The New Lens group chose to replace the backboards as a project “to show pride in their school.”

“I’m so proud of these young men,” Mansfield said to Murray’s eighth-grade class at a ribbon-cutting ceremony May 6.

The New Lens members worked with Minneapolis organization YouthPrize to learn about grant writing and secure the grant. Murray principal Stacy Theien-Collins and the district helped them gather the data needed to complete the grant. It took a few rounds of submissions before they received the good news that they had won the grant.

New Lens is a Twin Cities organization that works with black males, starting in eighth-grade, and aims to help them succeed in school through postsecondary education and to help them make an impact on their community.

“We follow them through high school, college. We are there for support and guidance,” Mansfield said, and fun. The program includes weekend activities, such as boxing and archery. “We go camping and fishing, and we have a lot of bonding. Once a month we go to dinner and a movie. The movie is always relevant to what’s going on.”

After each monthly movie, the group has a discussion time. “There’s been a lot of violence going on lately,” Mansfield said. His goal is to help the boys “be aware and appreciate what it means to live.

The project was “an impressive accomplishment for anyone, let alone a group of middle-schoolers,” said Theien-Collins. “The school is exceptionally proud of the work of Mr. Mansfield and the group. They are just one more reason that Murray is the quality school it is.”