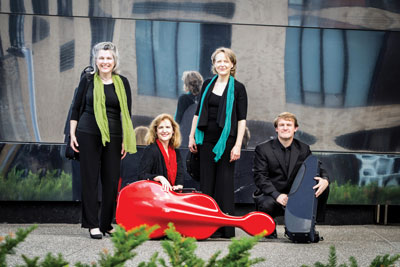 The Artaria String Quartet will open the Music in the Park Family Series in February.

January sun reflects cool, blue light off the blanket of snow outside and into the dining room as Julie Himmelstrup spreads photographs from more than two decades of Music in the Park Family Concerts on her dining table. She has a memory for each.

A little redhead gives her first scat performance. A boy learns to play a rhythmic instrument next to its creator. Children mesmerized by the variety of instruments from across the globe. The basement of St. Matthew’s Episcopal Church in St. Anthony Park filled with families simply enjoying music together.

This year, the Music in the Park Family Concert Series celebrates its 25th anniversary. Not much has changed since the beginning. Himmelstrup, the artistic director, still leads the program she started. That program still brings world-class musicians to perform concerts for children and families in St. Anthony Park. It still inspires children to enjoy and play classical music.

And according to Himmelstrup, it still wows parents who didn’t expect to see high-quality musicians in a neighborhood church basement.

Himmelstrup began the Family Concert Series because she wanted to bring acoustic and classical music to the next generation of audience members. Artists who perform in the series tailor their concert for children and families. However, Himmelstrup emphasizes that there is no dumbing- down of the performance just because it is directed at children. Instead, the program brings an authentic classical music experience to children and families.

The series combines a serious interest in classical and acoustic music with the joy of listening to, participating in and creating the art form. Throughout the years the concerts have allowed children to not only experience a variety of music but to perform it as well.

In November 1992, children joined with VIDA—a trio of cello, harp and percussion—to celebrate the coming of winter. Seven years later, soprano Cynthia Lohman and baritone Bradley Greenwald led participants in creating their own opera. Musicians Ruth MacKenzie and Joan Griffith taught the basics of jazz and inspired children to try their hand at scat singing in 2010.

And last year, children enjoyed seeing Windsync, a young wind quintet, perform their own version of “Peter and the Wolf.”

Himmelstrup has enjoyed seeing the audience react to these concerts. “Just watching these kids groove on these programs is really thrilling,” she says. “We’ve been able to bring groups from all over the world.”

The program has maintained an emphasis on drawing in talented musicians throughout its 25 years. But some things have changed.

“It’s gotten a lot more organized,” Himmelstrup says. The series is able to bring in more groups with international reputations. Younger ensembles have performed, and have brought with them a different style of training, playing both classical music and jazz for their audiences.

This year’s series features an all- Minnesotan line-up. According to Himmelstrup, they are all major influences in the music they present. String quartet Artaria will start the season off with “Making Friends through Music” on Friday, Feb. 27. Their performance will also feature a teen quartet from the Artaria Chamber Music School.

On Friday, March 13, Ross Sutter, Laura MacKenzie and Danielle Enblom will perform “Northern Gael—Music and Dance from Ireland and Scotland.” The audience will have a chance to sing along, play instruments and learn some dance steps.

Leo and Kathy Lara will finish the season with “Folk Music from Latin America” on Friday, April 10. The interactive concert will introduce authentic folk instruments, and children of all ages will get to sing a Cuban lullaby and simulate the sounds of the rainforest.

As the sun sets on our conversation, Himmelstrup’s husband, Anders, turns on a light. He believes in the value of the series too.

“It’s the education of the real meaning of music—it’s emotional,” he says.

“Sometimes the simplest things are most effective,” Julie Himmelstrup adds, remembering a performance where parents and children sang “Twinkle Twinkle Little Star” together. “The simple act of singing or participating in something is such a wonderful thing.”

Teresa Townsend is a freelance reporter and coffee roaster in St. Paul.