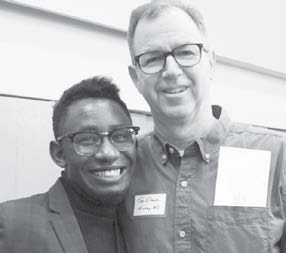 MBanda plans to take time off to visit Rwanda, his homeland, before beginning studies at Lewis and Clark College in Portland, Ore. The scholarship is named after Schumacher, the longtime former executive director of the SAP Community Foundation.

Harwell named student of the year 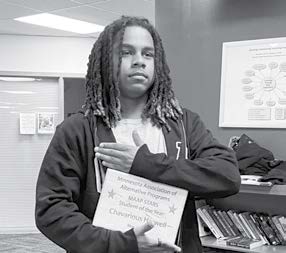 Chavarious “Biggs” Harwell, a student at Jennings Community School, was awarded the Student of the Year award by the Minnesota Association of Alternative Programs.

Harwell’s accomplishments include serving on his school’s board of directors, attending classes at Minneapolis Community and Technical College, becoming a published writer, directing and producing two documentary films and giving a presentation at a state educational conference in Duluth.

The Como Community Council has set up DIY (do-it-yourself) kits for people interested in pulling trash from the water and shoreline at Como Lake. District 10 will provide the gear: masks, grabbers, gloves, buckets, bags, rakes and advice on how to clean up correctly.

Sign up for the summer’s first do-it-yourself version of the Como Lake Clean-Up, letting District 10 know how many people will be in your cleaning party and what gear you want. Reserve your DIY kit at: www.district10comopark.org/lake_cleanup.html.

St. Anthony Park Area Seniors announced that Katherine Eklund and Gordon Murdock retired from its board of directors at the end of June.

Eklund, a St. Anthony Park resident, has volunteered with St. Anthony Park Area Seniors since 2014 when she joined the organization’s board. She has rotated off the board after serving the maximum six consecutive years. She served on several committees during that time and since 2016 had been board secretary.

Murdock, a St. Anthony Park resident, also served a maximum six consecutive years on the board. During that time, he was on the strategic planning and finance committees.

James Stewart, a Macalester College emeritus professor of history, will discuss virtually “The Endless Civil War” at 1 p.m. on July 14 and 21 as part of the Rose­ville Library’s Tuesday Scholars program.

Stewart, a scholar of the abolitionist movement, will discuss the ongoing legacy of our nation’s most divisive conflict and how it continues to affect our lives today. These are online programs offered remotely using Zoom communication software and you must register in advance for the event at https://rclreads.bibliocommons.com/events. After registering, you will receive a confirmation email containing information about joining the webinar. For further information, call the Library at 651-724-6001.