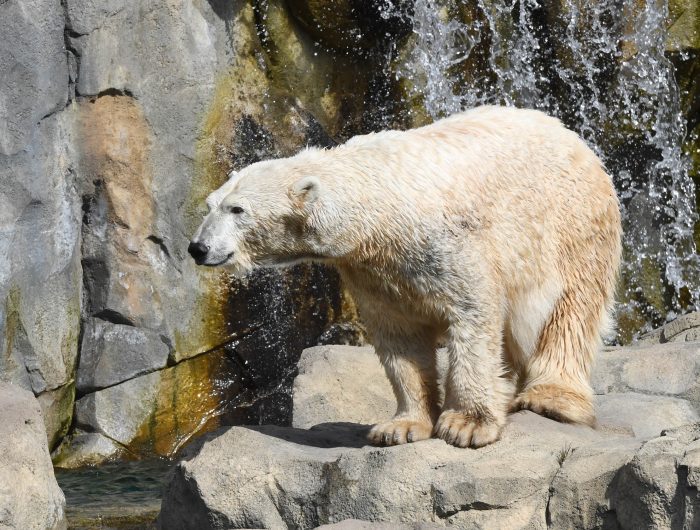 Nan, short for the Inupiaq word Nanutaaq, which means young of a bear, was orphaned and discovered under a house in Barrow, Alaska.

After wildlife authorities determined she was too young to survive in the wild on her own, Nan was placed under human care at Point Defiance Zoo and Aquari­um in Tacoma, Wash., where she resided for nearly five years, according to Como Zoo officials. Later, she transferred to the Toledo Zoo for 16 years and the Brookfield Zoo in Chicago for 4 years.

In January, a Como Friends donor provided the funding for Como’s zookeepers to travel and transport Nan to Como Park Zoo & Conservatory.

Although Neil and Nan are not a breeding couple, they will provide each other company, according to Como Zoo officials.

“Nan is an important ambassador for her threatened species,” Como Zoo Director Michelle Furrer said. “When people see and learn more about polar bears, it brings awareness of their plight in the wild.”

In 2008, the polar bear became the first species to be listed under the Endangered Species Act as threatened primarily due to climate change. There are an estimated 22,000 to 31,000 polar bears in the wild, and polar bear numbers are projected to decline by 30 percent by 2050.

Besides visiting the Como Zoo, people can see video of Nan on “Como Live.”

The St. Anthony Park Area Seniors is planning virtual “lunch bunch” sessions from noon to 1 p.m. on April 14 and 28.

Also, SAPAS has quite a few face masks available for seniors and jigsaw puzzles to share. For further details on registering for the lunch sessions, please call the seniors office at 651-642-9052.

The Ramsey County Library’s virtual Tuesday Scholars talks continue in April with all programs running from 1 p.m. to 2:30 p.m. Join local academic and experts as they share their knowledge on a variety of topics.

To register for any or all of these online Tuesday Scholar talks, visit the Ramsey County’s Library website here or call 651-724-6001. After registering, you will receive a confirmation email containing information about joining the webinar.

Here is the lineup of speakers:

March 30
The Strategies of White Supremacists

Lisa K. Waldner, an associate dean and sociology professor at St. Thomas University, will discuss the techniques of white supremacist groups in Minnesota and around the nation.

April 6
The Supreme Court and the Theater of Judicial Politics

Teresa Collett, a professor at the University of St. Thomas School of Law, will explore the evolution of confirmation hearings and judicial appointments to the U.S. Supreme Court.

April 13
The Demographics of Democracy

Michael D. Minta, an associate professor in political science at the University of Minnesota, will talk about the demographic characteristics of American voters from the 2020 Presidential election and what they mean for our national political future.

Kim Heikkila, author of “Booth Girls: Pregnancy, Adoption, and the Secrets We Kept,” will discuss her research into the history of the Salvation Army’s Booth Memorial Hospital in St. Paul from half a century ago, a facility that was a home for unwed mothers.

Jeff Blodgett, a Minnesota DFL political strategist who helped run Paul Wellstone’s three U.S. Senate races, will offer a retrospective look at Wellstone, his politi­cal times and his legacy for our own era.

Virtual sessions on US presidency

Popular local historian J.B. Andersen will continue his virtual weekly series on “The Presidency: Campaigns and Crises” from 1 to 2:30 p.m., Wednesdays from March 31 through April 14. The sessions, offered by the Ramsey County Library, are:

March 31—“Third Parties and the Rise of the Secret Ballot”

April 14—“The Stain that Haunts US: Racism and the Presidency”