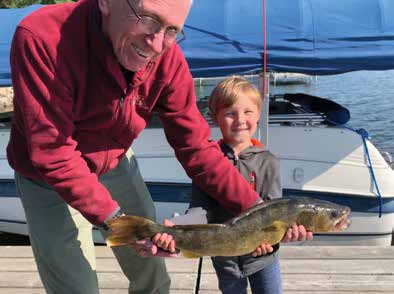 Whopper of a catch!

If 5-year-old Mark Frosch has been hooked on fishing, who can blame him?

In early August, the St. Anthony Park kindergartner went on his first fishing trip with his grandfather, Daniel Parker, on Gull Lake, in Cass/Crow Wing County.

“Right as the two of them were about to head in, Grandpa heard Mark’s line go out,” said Anne Frosch, Mark’s mother. “After 15 minutes, they landed a 28-inch walleye.”

Congratulations to Mark and Grandfather Daniel!

Flies and Beetles and Scales, Oh My!

Anh Tran, a Ph.D. candidate in the University of Minnesota Department of Entomology, will talk about the latest on insects in Minnesota gardens at the Oct. 1 meeting of the St. Anthony Park Garden Club. Refreshments are at 7 p.m. and the program begins at 7:30 p.m. at St. Anthony Park Lutheran Church, 2323 Como Ave. (Enter door on Luther Place.)

The Roseville Library, 2180 N. Hamline Ave., has resumed its Tuesday Scholar talks this fall with local scholars sharing their specialized knowledge. All talks, free to the public, begin at 1 p.m. Here is the current schedule:

New Commentary on Book of Isaiah

Dr. A. Joseph Everson will hold the second adult study session on his new biblical commentary on the book of the prophet Isaiah at St. Anthony Park Lutheran Church Sunday, Sept. 22, at 10 a.m. All are welcome.

The Vision of the Prophet Isaiah: Hope in a War-Weary World—A Commentary, was released by Wipf and Stock Publishers in March.

Written for laypeople, the study focuses on the final form of the scroll of Isaiah from the time when it was set apart as “canon” by Jewish scholars at about 400 B.C.E. Throughout history, Isaiah has been a major source of inspiration and common ground for Jews, Christians and Muslims.

From 1968 to 1976, Iverson taught at Luther College in Decorah, Iowa, and at St. John’s University in Collegeville, Minn. He was pastor at Hope Lutheran Church in St. Paul from 1976 to 1990 and professor of religion at California Lutheran University in Thousand Oaks, Calif., from 1990 to 2014. Since his retirement, Joe and his wife Sue have been summer residents of St. Anthony Park.

The nonprofit Women’s Drum Center, 2242 University Ave., will offer a class in hand drums for beginners on Oct. 15, 5:30 to 6:30 p.m. The cost is $10. Drums are provided. For more information, visit womensdrumcenter.org.

Music in the Park concert

The 2019-20 Julie Himmelstrup Music in the Park Series will open with a performance by the Montrose Trio. Hailed as “. . . one of the top piano trios in the world” by The Washington Post, the Montrose Trio will perform a program, featuring Dvořák and Schubert on Sunday, Sept. 22, at St. Anthony Park United Church of Christ. Tickets are $22 to $33. For more information, visit https://schubert.org/event/montrose-trio/

Journey’s End opens Friday, Oct. 18, and runs through Sunday, Nov. 10, at the Gremlin Theatre, 550 Vandalia St., St. Paul. Tickets are $28 for general admission and under 30 pay half your age every night! The play, directed by Bain Boehlke, is set in the front-line trenches near Sant Quentin in 1918, toward the end of the First World War. The play gives a powerful glimpse into the harrowing experiences of a British Army infantry company, whose story plays out in the officers’ dugout over four days in March 1918.

“Do It Herself” Women’s event

Women 18 and older are invited to “Do It Herself” at Rose Hill Alliance Church, 2105 W. Roselawn Ave., Roseville, on Saturday, Nov. 9, from 9 a.m. to noon. Participants select two sessions from four available: instant-pot autumn soups, coconut-oil skin products, Christmas origami, or heat packs and home remedies for colds and flus. Sessions vary from demo to hands-on and include some take-home samples or finished items. Cost for the entire morning is $5. To register, email Dwenda at gjerd001@umn.edu by 11-2-19, and include name, phone number and session preferences.

Donations for either group can leave items at the church Donation Center, through the inner doors and to the left at the Thomas Street entry. For more information, call the church at 651-644-1421.

Hand-drum and percussion instructor Devin Tomczik will begin an eight-week circle drum class on Sundays starting Sept. 22 for people interested in learning hand drums. Classes will be held from 2 to 3 p.m. Sundays through Nov. 10 at 795 Raymond Ave., Studio D. Price is $160 for all eight classes or join anytime during the session with a pro-­rated fee. For more information, contact Tomczik at dmtomczik@gmail.com or 763-219-2104.