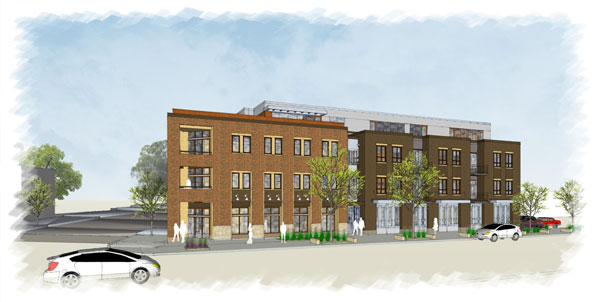 Park 24: a three-and-a-half-story, 24-unit apartment building could be open for rent in spring 2016. Drawing courtesy of Collage Architects

If all goes according to plan, Ned Wesenberg says there should be a lot of new housing inventory on the market in St. Anthony Park come spring 2016.

That’s when Wesenberg— owner of Park Service and the BP station on Como Avenue, as well as the Healy Building at 2301 Como Ave. and the apartment building behind it—hopes a three-and-a-halfstory 24-unit apartment complex will be open for rent at the northeast corner of Como and Doswell avenues.

Developers Tanya Bell and Judd Fenlon, along with architect Pete Keely of Collage Architects on Raymond Avenue, presented plans for the project at the District 12 Land Use Committee meeting on March 12.

The project, which Wesenberg has named Park 24, will include underground heated parking and market-rate one- and two-bedroom apartments that Wesenberg says will appeal to local residents who have hit a point in their lives where their children have grown; they are tired of taking care of “yards, fascia, soffits and gutters”; they “want to travel and do things” without the burden of a home to care for; and they are not ready for assisted living. And it’ll be right on “Main Street,” kitty-corner from Tim & Tom’s Speedy Market, across from Sunrise Bank and—if another proposed project comes to fruition—a hardware store.

At press time, Wesenberg had been trying to talk with representatives at the U.S. Postal Service to offer space on the ground floor of his building to house a new post office, to replace the building at 2286 Como Ave., which is being purchased by Frattalone’s Ace Hardware.

Neighborhood response to the project has been positive, Wesenberg said, as neighbors have been stopping in at Park Service to inquire about rental once news about it spread.

“I never knew there was such a demand,” he said. “It’s going to be a hit. It will be filled by the time the shovel hits the ground,” which he hopes will be in September.

Both the Healy Building and the apartment building behind it will, of course, be torn down to accommodate the project. Wesenberg met with tenants of both buildings in March to discuss the project. He said that Fenlon is available to assist businesses with finding new locations.

Local businesses in the Healy Building include Como Rose Travel, dentist Frank Steen’s office, Acupuncture by Cadance, and a number of psychologists’ offices.

Wesenberg described the building as “being on life support”: It needs a new roof, new plumbing and is not ADA compliant, he said.

Wesenberg, who grew up in the neighborhood and recalls a vibrant business center on Como Avenue in his youth, says developments like this are needed “if we are going to get it back the way it used to be around here.” Park 24 will help existing and any new businesses on the street “take off,” he said.