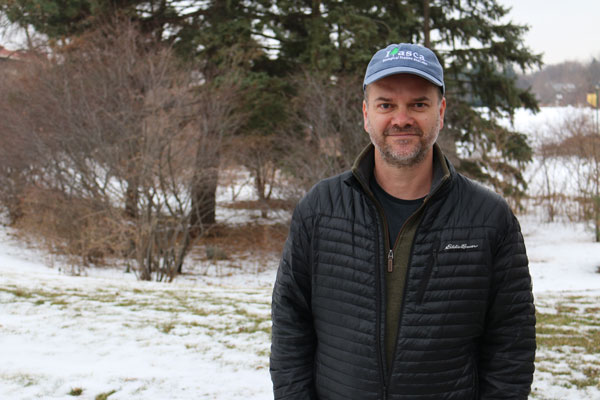 St. Anthony Park resident Jonathan Schilling is heading to the U’s Itasca Biological Station and Laboratories in May. Photo by Stephanie Xenos, University of Minnesota

Jonathan Schilling took a leap of faith in the direction of Itasca State Park when he was named director at the University of Minnesota’s Itasca Biological Station and Laboratories on Jan. 1. Leaving his role as a faculty member in the Department of Bioproducts & Biosystems Engineering at the university was a risk, but the Itasca job was an opportunity Schilling couldn’t turn down.

“I was in my 12th year at the university, which is considered midcareer,” he said. “It was about the time in a career where you might take on some administrative duties, and so this opportunity kind of came out of left field. However, with a lot of colleagues mentioning that this sounded a lot like something I would be suited for, I had to really take a close look.”

After a series of deep discussions at home with his wife and 8- and 11-year-old children, Schilling decided to apply.

“The opportunity was posted about a year before it was filled, so I had a lot of time to think about it,” he said. “Ultimately, it was the right choice for me personally and for my family.”

Schilling will live at the station for part of the year. He officially moves in May 2018 and will live in a cabin from mid-May through August. His family will join him in the summer. Schilling will spend the other nine months of the year at his home in St. Anthony Park and continue as an adjunct associate in plant pathology at the U.

The biological station is housed within Itasca State Park and features a 50-acre campus with an auditorium, labs and housing facilities. Schilling will assist in running the station by dealing with the facilities and taking care of the maintenance. He will also participate in public-engagement activities and assist research groups that come to the station.

“Itasca has 25 percent of Minnesota’s old-growth forest cradling the headwaters of the Mississippi River,” Schilling said. “If you know me, you’ll know that this opportunity had my name all over it, along with my family. It’s a place to tuck into wilderness, while leaving the cabin door open for other scientists.”

Schilling’s wife is a faculty member at Augsburg College who is tasked with doing aquatic ecology research during the summer months, so this opportunity is a good fit for her as well. The Schilling children are also excited about this change.

“My kids are big nature nerds,” Schilling said. “They are excited to have the run of the land in a state park. They can’t wait to run around off leash, so to speak.”

Schilling is most looking forward to being outside the walls of a boardroom.

“I am keen on the interface with people doing different things,” he said. Instead of attending meetings or serving on a committee, I can interact with faculty and students informally and focus on the science part of what I do. Personally, I am excited to be in the woods every day when I wake up instead of having to travel to be there.”

The last director at Itasca lasted 20 years and Schilling is already tentatively planning for his tenure to last at least as long.

“I am playing the long game,” he said. “I think that is the smartest idea for me because hopefully, as time goes on, I will be able to bear the fruit of my own seeds in a lot of ways.”

Jason DeMoe has hiked at least one trail in every Minnesota state park, including Itasca.