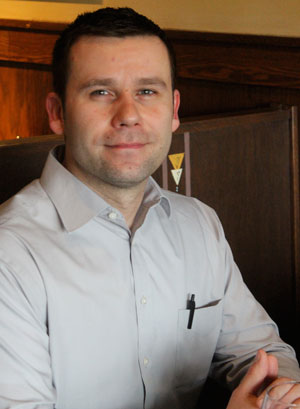 Bryan White stepped into the role as general manager at Muffuletta in March.

White, who had been working as assistant manager at Salut in Edina, replaces Chris Boyd. Muffuletta and Salut are both part of the Parasole restaurant company.

White says the 37-year-old restaurant will stay the course of emphasizing seasonal farm-to-table dishes. His aim is to promote the restaurant’s amenities, including its private dining room in the back of the building.

“It’s a great venue for graduations and wedding or baby showers,” he said. He’s also brainstorming with other Como-Carter business people on ideas that would help promote the area.

The businesses along Como Avenue don’t have the advantage of high traffic moving through the area, White says.

“It’s a destination area,” he says, and he’s working with Dan Marshall at Peapods and Jon Schumacher with the St. Anthony Park Community Foundation to form a group that he hopes will collaborate to bring events and promotions to drive more customers into the neighborhood.