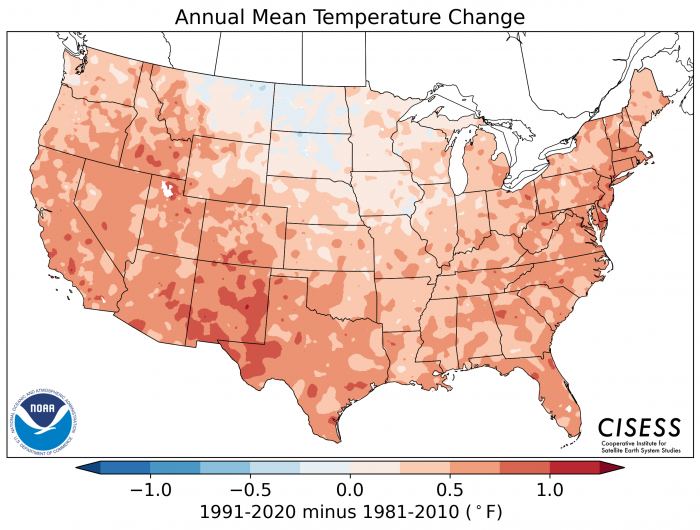 This past June was hotter than normal in Minnesota by about 7 degrees, meteorologists reported this summer.

But what’s considered normal for temperature, precipitation and other weather events and who decides?

In fact, “climate normals” are yardsticks that are recalibrated every decade by the National Oceanographic and Atmospheric Administration, averaging the data from the previous 30 years. This spring, NOAA released its new climate normals, and the news is unsettling, though not surprising.

Half a degree of warming might not seem like much over 10 years, but the tell is in the accelerating trend. In the 125 years of record-keeping since 1895, the warming trend averages to 0.16 degree per decade overall. Half a degree is triple that average rate.

One key point about climate normals is that we are using the past 30 years to represent the present, essentially looking in the rearview mirror. So, our buy-in should be cautious, because a fast changing present makes past benchmarks less relevant.

Still, the decade based system is valuable. It improves our understanding of the earth’s climate system, models how it works and documents our steady march to warmness. Let’s use that evidence as further reason to do all we can to lessen climate change—and adapt to it.

For the Twin Cities, our new “normal” annual average temperature is 46.9 degrees, most of that increase is on the low end: Our average low is now 38.4 degrees (up 1.1 degrees) while our average high is 55.4 degrees (up just 0.1 degree).

Let’s look at our changes by season. Our average temperature has risen by 1.0 degree in winter but by only 0.6 degree in summer. And most of that warming is from higher minimums, with winter lows rising by 1.4 degrees and summer lows by 1.2 degrees.

At the other end of the scale, the winter highs increased by only 0.3 degree and the summer highs by 0.1 degree. A few obvious results: Hotter summer nights; less winter-kill for plants (as hardiness zones creep north), but also fewer pests killed by the cold; and less consistent snow cover with more freeze-thaw cycles.

This pattern—especially the rising minimums—is not surprising to climate scientists. With the steady rise in man-made carbon dioxide (CO2), we see the steady warming of the earth’s atmosphere. Heated air holds more moisture as water vapor. Like carbon dioxide and methane, water vapor is a heat trapping gas, and it effectively doubles the heat holding power of carbon dioxide alone. Since the earth loses most of its heat at night, the moister nighttime air reduces our heat loss to space, especially during long winter nights.

The climate normals also include rain and snow. Despite this year’s dryness, our average annual precipitation is up by 1.10 inches in winter, 0.39 inches in summer.

Another consequence of warmer, moister air is that drier areas tend to become drier and wet areas wetter. With more evaporation in our arid regions, there is higher risk of persistent droughts, wildfires and crop failures. With more rain and snow falling in our humid regions, there is a greater risk of more intense, mega-rain dumps leading to more record floods.

Remember, these climate normals will keep changing in the future. So, when you hear talk of “averages,” keep in mind that they’re not a permanent base for comparison. The shifting normals themselves are indications of climate change. n

Mike Lukes served in the Navy as a geophysical officer and has worked for the National Weather Service as its upper-air test manager and as a service hydrologist. He holds a master of science degree in physical meteorology from Florida State University. He has seen the earth’s carbon dioxide rise by 32 percent +107 parts per million) in his lifetime. Now retired, he lives in St. Anthony Park.