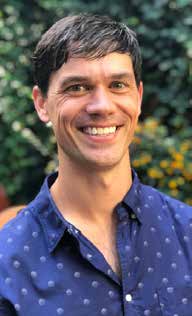 New office will be doggone close to work for this vet!

According to the U.S. Census Bureau, more Americans are working from home than ever before—some 8 million people in 2017, which doesn’t include those who are self-employed. Telecommuting is an option for some so-called knowledge workers, but it’s not feasible for a lot of people—veterinarians, for example.

But if you can’t work from home, the next best thing is being able to walk to work. Sometime next year that will be possible for Dr. Starke Mueller, who lives in St. Anthony Park. Mueller is building a new veterinary clinic at Raymond and Hampden avenues, just a half block from where he lives with his wife, Breanna, and their four children: Petra, 6; Torah, 4; Selah, 3; and Zion, 1.

Mueller bought the property at 918 Raymond Ave., next to the Hampden Park Co-op, in 2016 from Marty Ruddy, of Terra Firma Building and Remodeling. Ruddy’s plans for the site changed, and he then chose to sell to a local resident.

Mueller’s site will have seven parking spots, plus stands to accommodate four bicycles. The clinic will occupy the first floor while the second floor will host two, 2-bedroom apartments, each with a balcony overlooking Raymond Avenue.

“I wanted this building to be environmentally friendly,” said Mueller, who was an anthropology and environmental studies major at Dartmouth College. The building will feature electrical heat, making use of Excel Energy’s Windsource program and will have a solar collector over the parking area, plus a rainwater diversion system to keep runoff out of the city’s storm sewer system.

The parking lot solar array will be the first of its kind in St. Paul. It and the stormwater diversion system were designed by Stephen Mastey, a local landscape architect with an office near the building site. Stormwater will be captured by an infiltration system under the parking lot that uses tire-derived aggregate, the same material used under Joy of the People’s new soccer field in south St. Anthony Park, also designed by Mastey. According to Mastey, most waste tires created in the U.S. are shipped overseas and burned for fuel, creating air-borne pollutants.

“Using tires and their geotechnical properties to keep water out of our overburdened storm sewer system makes so much more sense, both environmentally and practically,” he said.

A rain garden in front of the new building will capture water not diverted to the parking lot system, as well as most of the runoff from the adjacent co-op building and parking lot. To replace the mature oaks lost to construction, more than 20 new trees will be planted as part of the project.

Mastey was also instrumental in helping Mueller acquire slate tiles that were decommissioned from St. Paul’s old City Hall in 1929. Those repurposed tiles will cover the new building’s exterior.

Mueller said the current building design is the third one he’s considered as the first two proved either too expensive or incompatible with city requirements. One key to bringing down the price of the project was modular construction. The exterior walls were built in sections in Detroit Lakes, trucked to the site and put up in a day.

Before breaking ground, Mueller shared his plans with the District 12 Community Council and Hampden Park Co-op. “I’ve tried to keep the lines of communication open throughout the process,” he said.

Mueller didn’t pursue veterinary medicine until after he graduated from college. He was in Thailand when the Indian Ocean tsunami hit in 2004 and later spent time in India, and had experiences that created a conviction to do something that would help people.

“I wasn’t sure what direction I should go in,” he said, “but I began to realize that one way to help people is by helping animals.”

After a year and a half of post-undergraduate preparatory coursework, Mueller was accepted at the University of Minnesota’s Veterinary School, graduating in 2011. His first job was with Banfield Pet Hospital in Eagan where he worked 10-hour days. By then he’d married, and when his first two children were born, he found his work schedule incompatible with the kind of family life he wanted.

His next job was at VCA Ani­mal Care Hospital in Richfield where he was the medical director, an experience that gave him a taste of running a business. “I started thinking that if I owned my own practice, I could set my own hours and be my own boss,” he recalled.

Before acting on that idea, however, Mueller pursued another of his goals: Use his veterinary skills internationally and satisfy a yen for travel. He took a position as a civilian veterinarian for the Army. He and his family rented their house in St. Anthony Park and relocated to Germany for 15 months.

In anticipation of their daughter Petra’s starting first grade, the Muellers moved back to St. Paul. And then work began on the new clinic. Like most building projects, it’s progressed more slowly than its originator hoped.

“I’m not committing myself to an opening date,” Mueller said. “All I can guarantee at this point is that it will be sometime in 2020.”

The Muellers originally moved to St. Anthony Park in 2014. Starke and Breanna were familiar with the area, having lived in Falcon Heights while he was in vet school. They were attracted by the neighborhood’s central location and small-town atmosphere.

Initially, Mueller’s clinic will be a one-man shop. Along with routine wellness visits and sick calls, he’ll be equipped to perform soft-tissue surgery and anticipates doing quite a bit of dental work, something he especially enjoys.

“Dental health for dogs and cats, like for humans, is an important part of overall health,” he said.

As a veterinarian, Mueller treats his animal patients in light of the households and families they live with, not in isolation from them. “If you work with pets, you work with people,” he said.

One consequence of a service provider’s living close to his or her workplace is the possibility of running into people in the neighborhood who want free advice: “Hiya Doc. Say, my beagle has been off his feed for a week, and I was wondering. . . .”

Mueller doesn’t mind the prospect of meeting pet owners when he’s out and about. “I’m happy to chat with people about their pets,” he said. “If it’s more appropriate to discuss during an office visit, I can always say, ‘Why don’t you stop by the clinic tomorrow. You could walk there.’ ”

Dave Healy, who lives in St. Anthony Park, is a former editor of the Park Bugle.