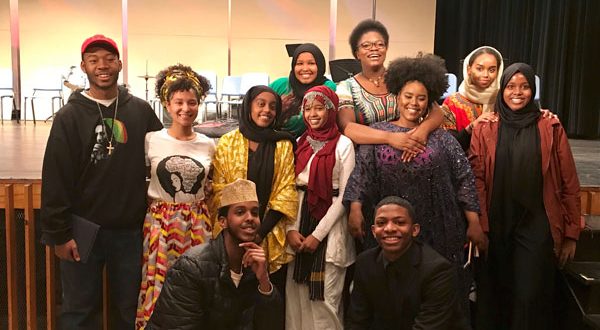 These members of Como’s Pan African Student Union presented original works to students and parents on Feb. 12 for the National African American Parent Involvement Day assembly in the auditorium.

Como’s Pan-African Student Union sponsored and produced an assembly for students and parents as part of National African American Parent Involvement Day (NAAPID) Feb. 12. Spoken word performances, poetry readings, music from the orchestra and choir, along with guest speakers and recognition of parents in attendance made for an impactful event.

The Como Culinary Club cooked with top chefs in the “Taste of the NFL” at St. Paul RiverCentre during Super Bowl weekend in January. Each Como student was paired with an executive chef from one of the NFL cities, helping prepare and serve the foods representative of the respective teams’ region. Como students earned high praise, according to Courtney Gbolo, who teaches Family and Consumer Science and leads the culinary club. Chefs and event organizers were impressed by the skill, strong work ethic and attitude of the Como’s club members.

The NFL sponsored a student assembly in the Como auditorium Feb. 1, featuring Reggie Dabbs, who spoke about resiliency and having a “never-give-up” attitude. Dabbs used personal anecdotes, music and humor and students laughed, sang and listened and had the opportunity to meet and take photos with Dabbs.

Two four-student Como teams participated in Global Minnesota’s annual Academic WorldQuest competition at the University of Minnesota Feb. 7. For the second consecutive year, both Como teams placed in the top 10 out of 40 teams from across the state.

The Como Park Booster Club is hosting its annual Urban Growler Fundraiser on Sunday, March 11, from 4 to 8 p.m. The event is a festive get-together to support Como and socialize.