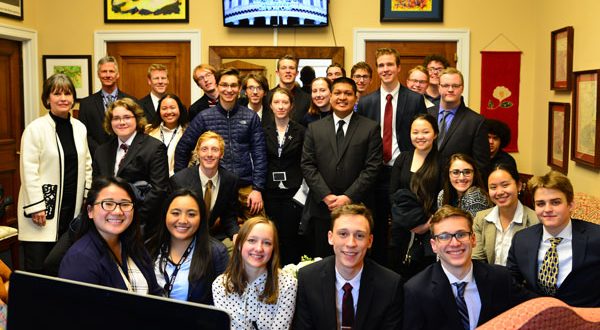 Como AP Government students participated in the national Close Up program had policy meetings on Capitol Hill with their elected officials March 7. The students are pictured with Congresswoman Betty McCollum (far left) in her Washington office.

Twenty-six seniors currently studying AP Government and AP Macroeconomics recently returned from a busy week of action and touring in Washington, D.C. The students were part of the national Close Up program, which promotes education in democracy and uses the capital as a living classroom. Como student highlights included visiting the House of Representatives in session, the Supreme Court, Senate committee meetings, a U.S. Capitol tour, national monuments, memorials, Smithsonian Museums and prominent Washington neighborhoods.

The students had policy meetings on Capitol Hill with Minnesota Senators Amy Klobuchar and Tina Smith and Representatives Betty McCollum and Tim Walz. Throughout the week, Como students were also in policy discussions and simulations with peers from across the nation. Students examined issues from multiple perspectives, listening to alternative points of view, while developing a greater sense of political efficacy to make a difference in their community and country.

Academic Bowl Cadets in the Como Marine JROTC earned a spot in the National Academic Bowl Finals for JROTC programs. William Farley, Joseph Newman, Anderson Xiong and Francisco Dominguez advanced to the championships in Washington, D.C., which will take place in June. This is the second consecutive year that a Como Marine JROTC team will have competed on the national level. The cadets prepared by diligently studying and trying to master fundamental ACT and SAT knowledge, which is the base of the contest.

Seventy-nine students participated in the March 1 blood drive organized by the Como Student Council. In total, 52 pints of blood were collected.

AP exams are coming up

AP Exam registration is under way at Como for all students who have been studying Advanced Placement courses this school year. AP coordinator Molly McCurdy expects to administer more than 550 exams, which will allow the students to demonstrate their proficiency in their coursework and earn college credits. Como students will be taking the national exams in 18 subjects, including art history, environmental science, human geography, calculus and many more.

BEASTBot is ready for competition

BEASTBot is the Como Robotics team and they have recently completed the construction of their robot during the six-week “build season.” Now they are eagerly awaiting the chance to roll it out in competition at the Minneapolis regional competition March 29 and 30 at the University of Minnesota.