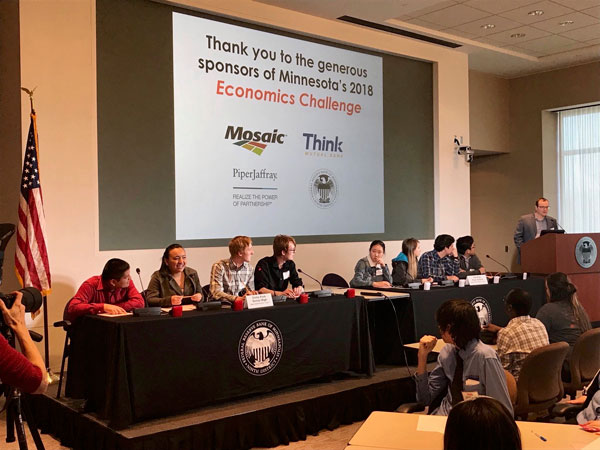 The Children’s Book Express has been working to get books into the hands of young students since 2000. Founded by Phil Martin, a retired English professor from Minneapolis Technical and Community College, the organization has delivered more than 26,000 books to elementary-age students.

Como NHS members Gabe Reynolds and Shyann Salverda made the book drive their senior service project. Since last fall, the two seniors helped promote the project and collect the books that will be distributed to elementary students this spring.

“Gabe and Shyann are doing much that will impact children at Como Elementary School,” Martin said. “They have shown great commitment.”

Eight Como AP Macroeconomics students spent a day at the Federal Reserve Bank in Minneapolis this spring competing in the Regional Invitational Econ Challenge. The two teams of four students worked individually and collaboratively to demonstrate their knowledge of economic concepts and theories.

Both of Como’s teams finished in the top three out of 14 teams. The team of Mario Sanchez-Lopez, Keleenah Yang, Eli Pattison and Jackson Kerr qualified for the quiz bowl and emerged as the regional champions. They advanced to the State Econ Challenge held April 11 and competed against five other regional winners from across the state.

The JROTC Drill Team were the champions at a recent competition in Sioux Falls, S.D., at the end of March. Como’s cadets took home the championship trophy. A dozen schools from across the region participated in this annual event. This is the second time in school history that Como has earned the top prize.