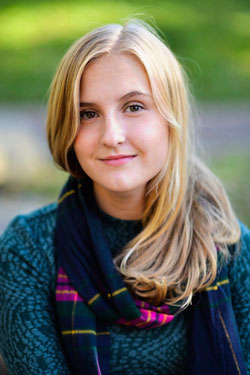 Senior Ellen Purdy is a 2015 U.S. Presidential Scholars Program semifinalist. The elite recognition program, established in 1964, includes 500 semifinalists from across the country. The 140 finalists will be recognized at the White House in June.

Purdy’s perfect ACT score, AP coursework, leadership and community service have led to several other prestigious honors and awards, including the National Merit Scholarship. She will attend the University of Chicago next fall.

Como’s College Possible students have earned more than $58,000 in private scholarships. College Possible helps first-generation college students navigate the college application process, from SAT and ACT prep through admission. Ninety-eight percent of Como’s 2015 College Possible class has been accepted into at least one college. Schools range from the University of Minnesota to Vassar College in New York, where senior Sundus Hassan will attend.

Senior’s composition to be performed by Como band

Senior John Paul Proper has composed and will conduct “Overture in Eb for Band” when the Como Park band premieres the piece at the Gala Concert Thursday, May 21, at 7 p.m. in the Como Auditorium. The work features many solos by individual seniors.

More than 50 French students participated in the annual A Vous la Parole language competition on April 21 at the University of Minnesota and came away with awards in contests that ranged from prose and poetry to song and original skits.

Academy of Finance activities included 14 girls attending the Girls Going Places conference, where they met with more than 30 female entrepreneurs; freshmen attending Junior Achievement’s “Finance Park,” where students were charged with completing a budget simulation; and 10 students attending Wells Fargo bank’s lecture on “Opportunists for our Next Generation.”

Twenty-five Como Karen students staged an original performance on April 23, expressing the obstacles, struggles and triumphs of their journey from Burma to St. Paul. Dangerous Productions, in collaboration with the Karen Organization of Minnesota, and Fight or Flight Academy, spent a month working with students in writing the play and learning advanced acrobatic skills to dramatize the action. It was a powerful and unique show for both the students and community.

More than 70 Marine Corps JROTC cadets attended Mess Night Dinner on May 1, an event coordinated by the 18 Cadets of the school’s junior class. The annual dinner is a time to bid farewell to the senior cadets. The new cadet commanding officer, Kaitlyn Thomas, and sergeant major, Eddy Vue, were also announced that evening.