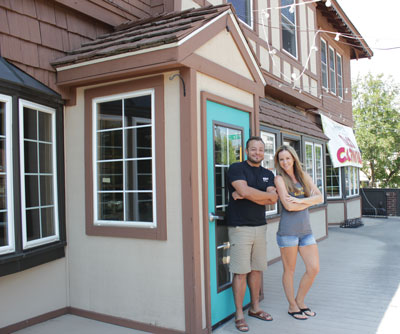 When the 40-year-old Muffuletta restaurant closed on Como Avenue last November, co-owner Phil Roberts said it was time for some “young turks” to put their name on the door. And here they are: Alejandro and Jenna Victoria. Photo by Kristal Leebrick

If you were in St. Anthony Park watching the parade on Como Avenue July 4, you may have noticed tacos and margaritas being sampled on the patio where former neighborhood staple Muffuletta once served food.

This was a preview of Nico’s Taco and Tequila Bar, which will move into the space this fall.

“We only hope to be the neighborhood gem Muffuletta was, [but Nico’s] will definitely be something different,” said Jenna Victoria, who is opening Nico’s with her husband, Alejandro, and Isidro and Natalie Victoria, who just happen to be Alejandro’s brother and Jenna’s sister.

“[Nico’s] might be a little lighter and approachable,” Victoria said. “You can come grab a taco for $3 or $4 dollars (or) just have chips and guac.”

The new Nico’s is not the Victorias’ first foray into the restaurant business. They opened a Nico’s on Hennepin Avenue in Minneapolis’ Uptown neighborhood in 2013 and had owned Amore Victoria on Lake Street in Uptown. The couple sold Amore Victoria, now Amore Uptown, nearly three years ago.

“We opened [the first] Nico’s while we were still running Amore [and] decided that Nico’s was more our forte. My husband is Mexican; he grew up eating all of this,” Victoria said.

“All of this” means “authentic street tacos, the kind you’d find in Mexico or California,” she said. “We specialize in our salsas, which are all made from scratch. We are also known for our margaritas, [which] are completely free of sugar, syrup — all that garbage that you have in some margaritas. We only use 100 percent agave tequila, pure agave nectar and fresh lime juice.”

While there will be aesthetic changes to the venue, Victoria said to expect only small alterations. “We will definitely keep the (Muffuletta) patio and make some minor changes to the furniture, colors and lights,” Victoria said. The changes include removing some of the booths in the front of the restaurant and adding a a bar to the middle of the café. The restaurateurs are planning to use the courtyard in Milton Square for dining and events.

Though an exact opening date is not known, Victoria has a rough idea of when residents of St. Anthony Park can get their hands on “indigenous Mexican specialties.” “We’re hoping to open in the late fall,” Victoria said. “That would be ideal for us.”