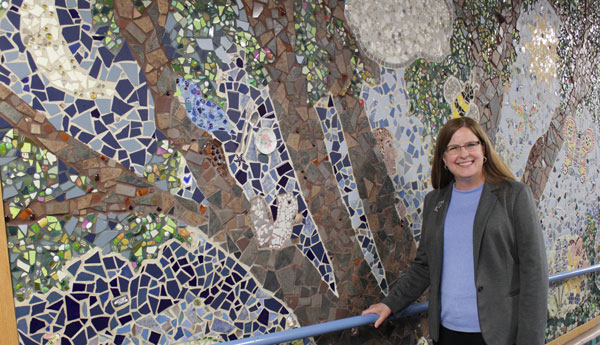 No more pencils, no more books

“Education has been the most gratifying and fulfilling career I could possible have had,” says St.
Anthony Park Elementary School principal Ann Johnson, who is retiring in June. Photo by Kristal
Leebrick

She’s been taped to a wall, milked a goat, colored her hair pink, dressed up as a chicken and wiggled through the “Chicken Dance” in every classroom at St. Anthony Park Elementary School. On April 13 Ann Johnson donned an inflatable Minion costume and hosted a Minion Dance Party in celebration of the school’s students reading an accumulated 300,000 minutes in 12 days as part of its annual read-a-thon.

The dance party marked her last read-a-thon, an annual fundraiser that had Johnson promising to do something crazy each spring if kids made their reading goals. Johnson is retiring in June after nearly four decades in St. Paul Public Schools. Her leave-taking from St. Anthony Park comes just as the school will undergo a $12.4 million twoyear remodel that will add more than 7,000 square feet of classroom space, expand the school’s cafeteria, and add windows and skylights to bring natural light into each classroom.

“I won’t get to be here for the cool new building,” she said, but she made the choice to retire now, in part because of the remodel and new programming that will go with it. “It’s best for a new principal to step in” to help orchestrate the changes, she said. That new principal should be named by the end of the school year, she said.

Johnson came to St. Anthony Park as principal in fall 2008. She grew up in St. Paul, attending Homecroft Elementary School and Highland junior and senior high schools. She attended the University of Minnesota for her bachelor’s degree and Hamline and St. Thomas universities for her graduate work. Her first job was at St. Paul Public Schools Open School. She then spent many years as a kindergarten teacher at several district schools. She was assistant principal at Expo Elementary School before coming to St. Anthony Park.

She recalls her first read-athon in spring 2009: She was asked to sit atop a dunk tank outside while students lobbed balls at the machine in hopes their ball hit the mark and the principal would land in the water. For many of them, that’s exactly what happened.

“It was my first year,” she said. “People weren’t sure what they thought of me. I was really nervous.” But after she climbed out of that tank, cold and wet, she thought, “I think I can call this year a success.”

“Education has been the most gratifying and fulfilling career I could possibly have had,” Johnson said, as she pulled out a poster board tucked behind a file cabinet in her office. The board is filled with classroom photos from her first 17 years as a teacher. She can still name most of the children in each photo.

She pointed to her first class at Expo. That was her first time getting to know refugee families, she said. “I learned so much about racial equity awareness and never to assume anything and to be a good listener.”

Johnson described herself as a smart, active student in grade school, and one of those kids who was often told to sit down and be quiet. “I wanted school to be engaging,” but for her the learning was by rote and “a lot of memorization.”

She recalls two principals in her grade school, each with a very different administrative style: the first “was so kind and wonderful I just wanted to please her,” Johnson said. The second walked around with a ruler that she often used “to swat students on the head if they were misbehaving.”

The contrast between the kinder educator and the authoritarian was pivotal for her. Learning “with an iron fist” doesn’t work for many children, she said. She considers kind, generous and experiential learning environments more conducive to learning.

After she hangs up her principal’s hat in June, Johnson plans to do “typical retirement things,” like travel. “The biggest deal is time is whizzing by,” she said. “I’m taking time to enjoy life.” And her book club friends say they are looking forward to her finally finishing a book.

Johnson doesn’t plan to leave education entirely. With her early-childhood background, she may get involved in advocating, either legislatively or in an educational setting, she said.

A celebration for Johnson will be held Thursday, May 18, 5-7 p.m., at the school, rain or shine. The community is invited. Treats will be provided by Leprechaun’s Dreamcycle and food will be available for purchase from the Foxy Falafel food truck.