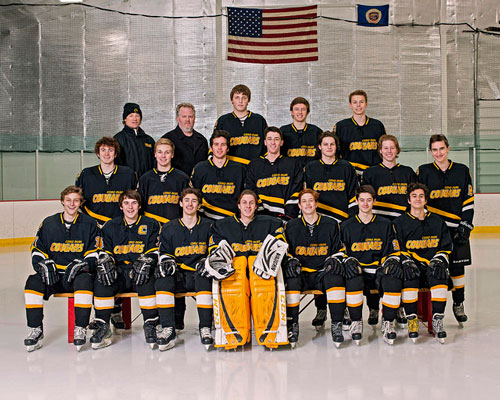 The Como Cougars are creating a special season, playing spirited hockey whenever and wherever they can. The St. Paul Pioneer Press took notice, which has raised eyebrows in the “State of Hockey” and beyond.

High school sports beat writer Tim Leighton’s Jan. 14 story in the Pioneer Press highlighted the nomadic nature of the Cougars. The article explained that with the Minnesota State Fair Coliseum closing its hockey operations last year, Como doesn’t have an arena, or even a sheet of ice, to call its own.

The newspaper story brought immediate international support. That same morning, Como athletic director Mike Searles received a call from a local sports retailer stating that a bag of hockey pucks was waiting for the team. They had been purchased by a gentleman in Dublin, Ireland, who read the story online, promptly called the store, and charged the pucks to his credit card.

The kind gesture from across the Atlantic should ensure the most basic object of hockey is always in high supply for the Cougars, even if ice time is not.

Coach David Bakken is in his fifth year leading the Cougars. He’s grateful for his team’s acceptance of things they can’t control, and he loves the work ethic of his team. Bakken says his team does “all the right things on the ice that don’t bring attention to ourselves but just simply help the team win.

“We don’t have guys trying to make highlight-reel moves that would cause a turnover with the puck ending up in our own net.”

Senior forward Matt Klein and junior defenseman Eliot Berven talked about how their practices consistently emphasize the details of shot blocking and back checking. Both of those hockey tactics require great effort and are not generally considered “fun” to drill.

Berven says they practice “a lot of shot blocking and our coach really values it.”

Bakken and assistant coach Carl Hamre even take time to recognize and re-visualize the best block, best back check and best pass after each game to reinforce the “right things” that the team did and needs to continue doing.

Combine the disciplined approach to the game with the talents of hard-skating scorer Ian Tully, and an immensely skilled goalie in Carter McCoy, and your neighborhood hockey team entered the final month of its season with a record of 15-1.

Season highlights include a 12-game winning streak to begin the season, a dramatic overtime victory over Coon Rapids made possible by McCoy’s hot hand, and winning the Richfield Holiday Tournament in convincing fashion, sweeping all three games in consecutive days.

The Cougars are averaging 5.2 goals a game while only allowing 1.6,

yet the quest for improvement is constant. Como’s toughest competition is looming with challenging opponents St. Louis Park, Minneapolis and Minnehaha Academy on the upcoming schedule. Then there are the two games in the final week of the regular season against the East Side rivals from Johnson.

It’s a classic St. Paul City showdown. Como will host its “home game” versus Johnson at the Highland Arena on Friday, Feb. 14. That’s the reality of a remarkable team that can’t control when or where it plays, but faithfully plays for each other every time they skate on to the ice—wherever that ice may be.