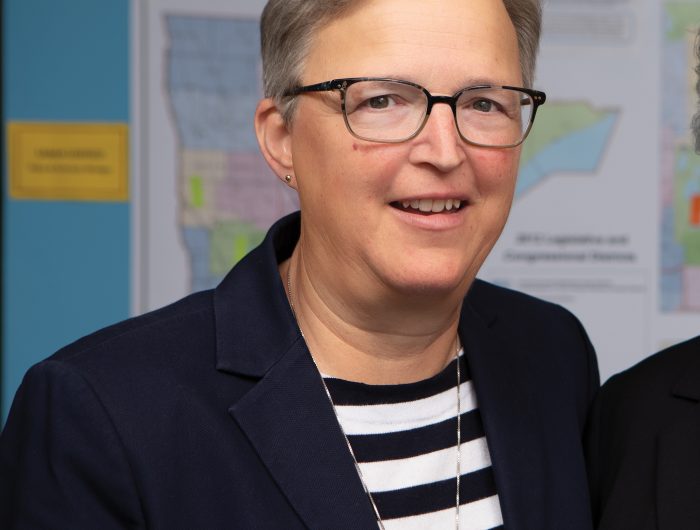 “I’m the kind of person that just can’t quite stop doing the thing I’ve been doing,” laughed Jane Leonard, the retiring president of Growth & Justice, a St. Anthony Park-based nonprofit.

Nevertheless, after four decades of going “full speed” in her career, Leonard said she is looking forward to working perhaps just 20 hours a week instead of her usual 60.

Growth & Justice is a research and advocacy organization that develops public policy proposals based on independent research and civic engagement. Leonard has been with Growth & Justice since 2018 and plans to officially retire in early June, although she describes her exit as a “phased transition” while the nonprofit makes decisions about its leadership and partnerships with other organizations.

Born in the Twin Cities, Leonard spent much of her childhood in the Washington, D.C., area and would return to her grandparents’ farm in Mille Lacs County in the summer.

“I had this sort of urban-rural experience as a child and that really framed my work as I look back on those 43 years,” Leonard said. “I was able to bridge those lives and see the differences, similarities and connections between rural and urban.”

Leonard started her career as a journalist and then entered the community development field in the mid-1980s. Since then, she has worked in every sector—public, private, nonprofit, local, state and national—with tenures at places like the Minnesota Office of Broadband Development, Minnesota Rural Partners and the Bush Foundation.

Leonard said one of the milestones of her career has been her contributions to the Minnesota Equity Blueprint, a community-driven, community-led policy guidebook focused on human capital, economic development, infrastructure and environmental resilience.

“If we don’t look at the world as the interrelated kind of place it is, we’ll continue to just work on one issue to the detriment of other things,” Leonard explained.

Kate Searls, former research director at Growth & Justice, has worked with Leonard on multiple projects over the past 27 years.

“[Leonard] works harder than almost anybody I know,” Searls said. All of Leonard’s projects have had an “underlying concept of making the world better for people who are being excluded. Of making all voices heard,” Searls reflected. “She’s very committed, and has been all along, to inclusion.”

Leonard has been a St. Anthony Park resident for 20 years with her spouse Lori Lippert and plans to remain active in the community. She is chair of the Saint Anthony Park Community Foundation and will continue working with that group in addition to serving on other boards.

Next spring, Leonard will also be teaching a class at Metropolitan State University where she is a community faculty member.

When it comes to more leisurely retirement plans, Leonard said she looks forward to traveling and spending more time with family and friends.

Reflecting on public policy efforts, Leonard is filled with optimism about the future of community development work.

“Despite all the upheavals that we’re in right now in the world,” she said, “I am so confident and I’m so heart-filled by the young people that are coming up, who are taking the lead.”