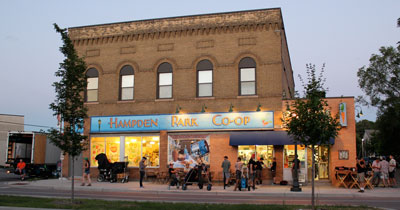 Once in a blue moon the stars come out

An almost-full moon and a few stars were shining on Hampden Park Co-op July 30, as a film crew used the food co-op for a scene in the movie “Wilson.”

Crews had been filming the movie, starring Woody Harrelson and Laura Dern, throughout the Twin Cities this summer. On July 30, trucks, cameras and a lot of people wearing headsets descended upon Raymond Avenue and Hampden Park, which was used in the filming.

The co-op closed two hours early that Thursday to accommodate the crew, which rumor has it, ate supper at St. Anthony Park Lutheran Church, just a mile-and-ahalf away on Como Avenue. The Bugle stayed late into the night to try to catch a photo of one of the stars, but not late enough. Luckily, we had a stringer: 14-yearold Logan Chelmo, a budding filmmaker from Shakopee, who stayed until his parents could get a shot of him with Harrelson (below). (Thanks, Logan!)