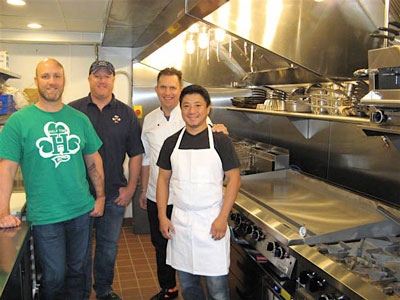 The Half Time Rec is taking a big step up from toaster oven pizza.

The new Paddy Shack at the Rec opened Oct. 20, adding food service to the popular south Como bar. Now customers can order walleye and Irish poutine chips or the “County Cork Rec Dog,” featuring beer cheese mac, green chiles, stadium mustard and popcorn, or maybe the Dublin Lawyer Roll, a lobster sandwich with cheese and cream sauce along with a splash of whiskey.

Patrons come to the south Como bar at 1013 Front Ave. to watch televised sports, play bocce ball and listen to music on the weekends. But until now, when hunger pains struck, there wasn’t much to keep them there.

“Ever since we bought this place five years ago, people would say, ‘We’ve had a great time, now we’re heading to Gabe’s or Schroeder’s (nearby bars with food) for something to eat,’” said Steve Mars, who co-owns the Half Time Rec with his brother, Scott.

“The bar business is complicated enough, we couldn’t imagine trying to figure out how to start up a restaurant,” he added, explaining the decision to seek a partner who would set up and run the restaurant operation.

The brothers chose a St. Paul native with some pretty solid culinary credentials: Jack Riebel, most recently chef and co-owner of the upscale Butcher and the Boar restaurant in downtown Minneapolis and a 2013 finalist for the prestigious James Beard Foundation Award for best chef in the Midwest.

He’s also one of the principals who have purchased and are renovating The Lexington restaurant at Grand and Lexington avenues.

Scott Mars knew Kevin Fitzgerald, one of Riebel’s partners at The Lexington, who had started the highly successful Smack Shack in downtown Minneapolis and introduced food service to the 1029 Bar, a favorite Northeast Minneapolis watering hole. The Mars brothers wanted to try a similar partnership at the Half Time Rec.

Riebel, who will function as executive chef, said he developed Paddy Shack menu items in the test kitchens of U.S. Foods, a leading restaurant supplier.

“I wanted what we offer to be high-end, but not ‘cheffy,’ ” Riebel said. “We’ll make it fresh and make it different. And we’re going to have the best fish and chips in the city.

“The Paddy Shack kitchen is definitely several steps above what you ordinarily see in a bar.” About two dozen full- and part-time positions are being added to staff the food operation.

Steve Mars said the bar is known for live music and that will continue to be the case, although there will be one change: It will be acoustic music during the dinner hour.

Food service is available from 11 a.m. to 10 p.m. Sunday through Thursday, and until midnight on Friday and Saturday. A Paddy Shack launch party is planned for late November, the date still to be determined.