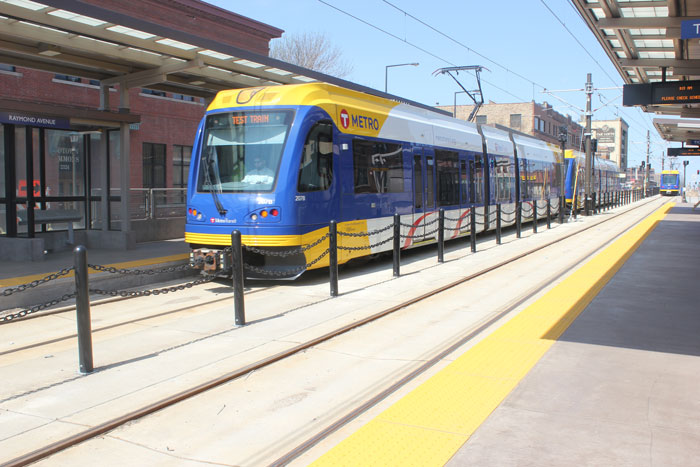 Party on the Green Line

Test trains have been moving along University Avenue for weeks in anticipation of the June 14 Green Line launch.

The rides are free, and there’s a party at every stop. In fact, the festivities associated with the opening of the Metro Transit Green Line on June 14 amount to one long linear carnival celebrating the uniqueness of the neighborhoods along the light-rail route.

For example, events at the Raymond Station will have a public arts focus in keeping with the area’s Creative Enterprise Zone, while the Hamline Station to the east will draw on the Minnesota State Fair for its theme.

Like their counterparts elsewhere on the line, the intent of the sponsoring organizations at the two Midway stations is to catch the attention of those taking advantage of the free rides on that Saturday. (There’s no charge to riders on June 15, as well.)

“We want to celebrate the Green Line and the neighborhood around the Raymond Station and encourage riders to come back,” said Amy Sparks, coordinator with the St. Anthony Park Community Council’s Creative Enterprise Zone.

Added Kari Canfield, president and executive director of the Midway Chamber of Commerce, “At the Hamline Station, we’ll be sending a strong message that our businesses on and around the avenue are open and welcoming by creating an atmosphere that encourages people to get off the train and see what we have to offer.”

On June 14, a ribbon-cutting ceremony at the Union Depot in downtown St. Paul will officially open the line. Following ceremonies at the individual stations, the launch celebrations start at 10 a.m. and continue to 4 p.m.

At the Raymond Station, the action will center on the Midtown Commons parking lot on the south side of University Avenue at Lasalle Street, just east of Raymond Avenue. There will be local music and entertainment on the main stage all day, ranging from bluegrass to Irish Americana, from alternative country to roots rock.

A second stage will feature a wide variety of performers, demonstrating everything from ballroom dancing to martial arts.

All around the area, local artists will be creating public art, including windsocks, shade structures and a mural-painting project. In many cases, event-goers will be invited to join in.

Food trucks and strolling musicians will add to the festive atmosphere.

Over at Hamline Station, “The Great Midway Get Together” will be headquartered in the parking lot on the southeast corner of Hamline and University Avenues. A grandstand will present live performances all day, including acts booked by the Turf Club and TV’s Choo Choo Bob Show.

In addition, a “Kidway” will feature the Como Park Zoo, the Minnesota Children’s Museum and the Twin City Model Railroad Museum, among others.

There will also be a bazaar with craftspeople and artists selling their wares and a food court featuring local restaurants.

Not all restaurants and businesses will be able to participate on site, of course, and event organizers want to encourage visitors to get out and explore the respective neighborhoods.

To help make that happen in the Raymond Station area, Sunrise Banks and the Saint Anthony Park Community Foundation are sponsoring a trolley. It will start from the bank branch at 2300 Como Ave. W., and loop down to the Sunrise branch on University Avenue and Vandalia Street, and return at about 30-minute intervals, with stops at Raymond and Territorial, the Raymond Avenue station, and local breweries Urban Growler and Bang Brewing Co.

The trolley will run from 9 a.m. to 3 p.m. A “coupon-on-a-stick” program at the Hamline Station will invite event-goers to take advantage of special offers at local restaurants that they can visit via a fleet of pedal-cabs. The Metropolitan Council and private sponsors are funding these community celebrations. It’s a massive undertaking and many details were still being firmed up as the Park Bugle went to press.

For an up-to-date list of features and performers at the Raymond Station launch celebration, go to sapcc.org. For the Hamline Station, go to hamlinemidway.org  or midwaychamber.com. Information about all opening day events can be found at www.metrotransit.org/opening-day.

Plenty of people are excited about the opening of the Green Line, but the Park Bugle found several business owners around the Raymond Station taking a decidedly wait-and-see attitude.

“I don’t honestly know if I’ll benefit from light rail, because this is such a niche business,” said Bruce Delles, owner of Twin Cities Reptiles, 2363 University Ave. W.

Over at Roller Revolution, 2418 University Avenue W., owner Gina Flak is more optimistic. She sells equipment, supplies and apparel to roller derby enthusiasts and has a lot of customers who go to school or work on the University of Minnesota’s Minneapolis campus.

“And there are a lot of roller derby people who don’t own cars; they bike everywhere, so they may use it, too,” she said. Flak said light-rail construction on her block was mostly completed by the time she moved in a little more than two years ago.

Although Delles has his own off-street parking, he said customers had a hard time getting to his store. And Rose, who felt the elimination of on-street parking on University keenly, says his business was down 16 percent at the peak of construction. “It’s slowly coming back, but I don’t know if it’ll ever be what it once was,” he said. About 200 businesses along the light-rail line received forgivable loans of up to $20,000 from a Metropolitan Council/City of St. Paul program to help them through the construction period. “The businesses that have survived, and the Met Council admits that we’ve lost 90 to 100 that they know of, did so because of strong management principles, not because of anything that anybody did for them,” said Jack McCann, president of the University Avenue Betterment Association. McCann has been an ongoing critic of the Metropolitan Council’s management of the project. He is a partner in Update Company, which owns eight buildings in the Raymond and University area. He was asked if landlords now will seek higher rents because of the perceived value of being near the Green Line. “In our case, we’ll be able to raise our rates slightly, but it will take a long time to recoup the $300,000 to $500,000 in business that we lost during construction,” he said. In the eyes of some, progress has come at a price. “Overall, I don’t think light rail has been good for University Avenue, because a lot of retail has gone away,” Delles said. “Maybe if some drivers become riders, they might have a chance to look around and see shops and restaurants they weren’t aware of and want to check out.” McCann continues to advocate a “pocket parking concept,” the creation of small lots of perhaps 20 spaces each per block. “If University Avenue is to retain a retail presence, we need to bring back parking somehow,” he said.