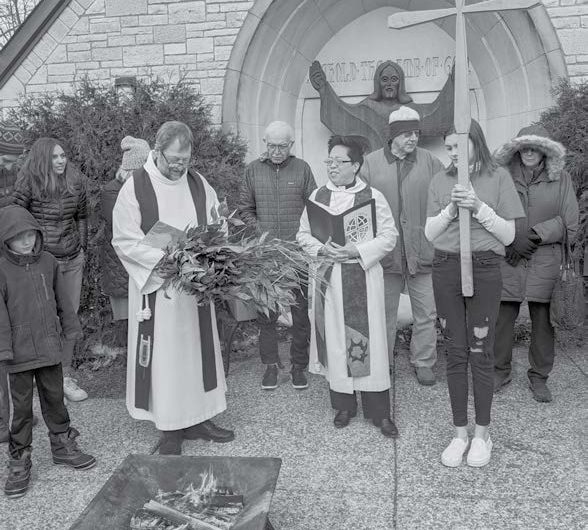 After nearly 19 years as the senior pastor of St. Anthony Park Lutheran Church, Glenn Berg-Moberg will be retiring as a man of the cloth on June 14.

“It has been a privilege to serve the congregation and neighborhood,” Pastor Glenn told the Bugle. “I will miss the people and cherish the memories. St. Anthony Park Lutheran Church is an extraordinarily gifted and faith-filled congregation.”

Pastor Glenn started his tenure at SAP Lutheran a month before 9/11 in 2001 and now will be retiring in the middle of America’s COVID-19 pandemic. Prior to coming to SAP Lutheran, he was a youth pastor for 15 years at churches in Wisconsin.

Initially, Pastor Glenn never thought about becoming a minister. Born in Virginia, Minn., in the state’s Iron Range region, Berg-Moberg’s father worked at the Minntac taconite plant and his mother was a homemaker, secretary and worked at a dry-cleaning business. Glenn was the youngest of four boys and his parents were active in a Lutheran church in Virginia.

After completing his public education in Virginia, Glenn attended St. Olaf College in Northfield, majoring in sociology. He had the privilege of singing in the renowned St. Olaf Choir, a formative experience that he says taught him the value of working toward excellence.

“I had never planned to enter the ministry, but found I was always thinking about theological questions, and biblical conundrums,” he says. “I moved to the Twin Cities to attend Luther Seminary to see if my questions could be answered. While I was a student there, I also had a job doing singing telegrams. They were all the rage at the time. That job was a lot of fun and paid better than the group home job.”

Ultimately, Glenn’s curiosity propelled him into the ministry. Through the years, he has made preaching a priority. “Interpreting the Bible energized me throughout my 34 years in parish ministry,’’ he says.

While at SAP Lutheran, Pastor Glenn said one of the highlights of his time came in 2015 when the congregation called Jill Rode, a married gay woman, to be its associate pastor.

“When I arrived at St. Anthony Park in 2001, our denomination was wrestling with the question of allowing gay pastors to be in a partnered relationship,” Pastor Glenn recalled. “Ordination had always been open to same-sex oriented persons, but they had been expected to remain celibate. This was a fundamental difference from straight clergy persons who were allowed to marry.

“There was a diversity of opinions on this matter among the members at SAPLC,” he said. “I am proud that the congregation had the courage to vote to call a married gay woman as the associate pastor. That was a sea change for the congregation. It opened doors to a different future.”

And the biggest challenge of being a minister?

“Helping people to see and trust that God is already at work in their lives,” Pastor Glenn says. “The biggest challenge lies in convincing people that God can use and is using the gifts and abilities they already possess. Jesus said the kingdom of God is like yeast that is mixed into the dough to raise the bread. The crucial thing to understand is that Jesus was not being poetic when he said that. He was using an analogy, not a metaphor. He was saying God’s will is working, just as one would say the yeast is active.”

Pastor Glenn says God is just as active now, also, in the midst of the current global pandemic. “We are not anti-science! God reveals truth in many ways. What we learn about the creation through the scientific method is true and real and is meant to serve the good of humanity.

“With the reality of a novel virus, we are called to do everything we can to guard the lives and good health of all our neighbors,” Pastor Glenn says. So, since March 15, his congregation suspended public worship “for the simple reason that a large gathering of people now carries a risk of spreading disease,” he says.

“Some church groups have protested that the government has no right to prevent churches from meeting. That is not our stance,” Pastor Glenn says. “Religious freedom is a cherished and necessary part of a free society. But genuine freedom is not a license to disregard the needs of others.

“Christians are called to serve the neighbor. If good health for all depends on practicing social distance, then the church stands ready to adapt worship practices to the benefit of everyone’s health,” he continues. “We now record worship materials like sermons, hymns and Sunday School lessons for online worship. Our members are participating regularly.”

Meanwhile, once he retires, Pastor Glenn intends to pursue metal sculpturing and creative writing, including producing songs, stories and poetry.

“My wife Karen and I have not had free weekends for decades,” he adds. “So, we look forward to using weekend time for bicycling, camping and, very soon, being first-time grandparents.”