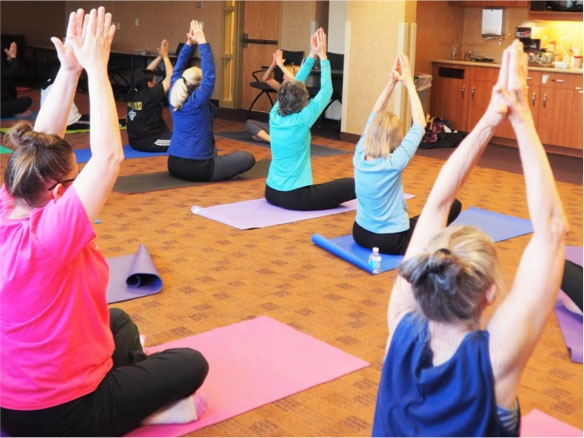 Each September, the Como Clinic Health Club hosts a free healthy grilling event in the clinic’s parking lot. At right is Dr. Steven Radosevich, medical director at the clinic.

Three nights after Donald Trump took the oath of office as the 45th president of the United States, nearly 50 people gathered in a conference room on the second floor of HealthPartners Como Clinic to attend a workshop on finding ways to cope with “presidential election stress” led by University of Minnesota researcher and psychologist Bill Doherty.

Two days later, in the same room in the same clinic, a smaller group joined eight HealthPartners nurses and physicians to learn about hospice care. And just three days after that, more than 35 clinic patients crammed into that same second-floor space and into the hallways for a weekly Saturday-morning yoga class offered through the Como Clinic Health Club.

That busy winter week was just a taste of a 7-year-old program launched at the clinic, located at 2500 Como Ave. in St. Anthony Park, that has succeeded “beyond our expectations,” said Doherty, a professor of family social science and a man who has a keen interest in “Citizen Health Care.”

For several years, Doherty had been doing work in what he calls “organizing patient leaders to work jointly with medical leaders to create initiatives to improve health.” His earlier projects focused on specific health issues, such as diabetes, smoking or children’s health, he said. “I was interested in seeing if a project could be formed around a clinic community where the health issues would be diverse. Would patients come forward in leadership based on an affiliation with a health clinic as a kind of small town promoting health and well-being?”

After talking with Dr. Steven Radosevich, medical director at the clinic, the Como Clinic Health Club was launched.

Mary Griffin, a resident of St. Anthony Park and a longtime patient at the clinic, was involved at the start.

Asked by her Como health provider if she would be interested in coming to a series of three meetings to discuss the feasibility of forming such a group, Griffin said yes. “Bill [Doherty] had a pretty big group there and tried to explain their vision. I thought, ‘This was interesting. You need a community to create change and you need a community to make things happen. And I don’t have time for it.’ ” But Doherty is a great salesman, Griffin said.

The underlying question asked in the formative stage was: “Is it possible to create a group of patients like a PTA or church group around the clinic?” Griffin said. “How do we as patients create a community to keep each other healthy and support each other?”

The Health Insurance Portability and Accountability Act of 1996 (HIPAA) prevents health providers from connecting patients with other patients who are dealing with similar issues. A doctor can’t say, “You should talk to Mary; she has the same health issues you do,” Griffin explained. But patients can connect with each other and the Como Clinic Health Club aims to do just that. Health providers often mention the club (it was first called the Active Patient Project) to their patients during office visits, and posters and leaflets advertise upcoming events at the clinic. The club also has a monthly email newsletter and a Facebook page. Members of the club are people who describe the Como Clinic as their home clinic.

The health club’s core committee, a group of a dozen people, including Doherty, Radosevich and Griffin, meets once a month “to talk about what we are going to do,” Griffin said. “Programs need to be participatory and it needs to be free. We want people to come and be engaged and for it to be accessible to everybody. And we want it to relate to our mission: Does this support people in their health goals?”

In January, the club began a partnership with the Good Acre on Larpenteur Avenue to offer cooking classes. Participants in the January class learned about one-pot meals like soup and made bone broth, curried lentil soup and quinoa vegetable soup.

When Dr. Richard Rose offered to lead a poetry discussion on end-of-life issues, people weren’t sure it would take. “Twelve people showed up,” Griffin said. “Now he does it every two months to a full room.” In January, the “Lifelines” poetry group discussed poems by Emily Dickinson and Wallace Stevens.

In the fall, the club held a series of community discussions on gun violence. In the warmer months, a group meets Saturday mornings at the clinic to walk in the neighborhood for as far and as long as participants can or want to. Some club members offer bigger hikes in nature areas and bike rides.

“You can be a more active participant in your own health care if you have other people to help you,” Griffin said. “Patients with high blood pressure may know that they need to go for a walk and eat a salad, but a lot of people have nobody to walk with and don’t know how to cook.”

Each September, the club hosts a healthy grilling event in the clinic parking lot. Grills are set up along with tables, chairs and tents, and the menu includes grain-based salads with grilled vegetables. “Dr. Radosevich likes to cook, so he comes up with the recipes,” Griffin said. “It’s free to anybody walking in and out of the clinic. We routinely serve several hundred people.”

The club has proved so successful and popular HealthPartners White Bear Lake Clinic is launching a similar program.

There is “nothing like it in the country, as far as I know,” said Doherty, who is considered the “process leader” of the Como club. “The key is patient leadership, not just programming. HealthPartners is committed to spreading the clinic health club idea.” Jennette Turner, Como Clinic Health Club program manager, will serve as the process leader at White Bear Lake.

Griffin calls herself a “citizen patient” in her role at the clinic’s club. “What we are doing is trying to be that responsive committee at church or the PTA of the Como Clinic. We are the group that puts things together. We aren’t the professionals. We aren’t the people who need help. We are the people in between. We are saying, ‘We can do health care together.’”

Want to learn more? You can sign up for the Spotlight On newsletter by emailing ComoHealthClub@HealthPartners.com or find the club on Facebook at Como Clinic Health Club.