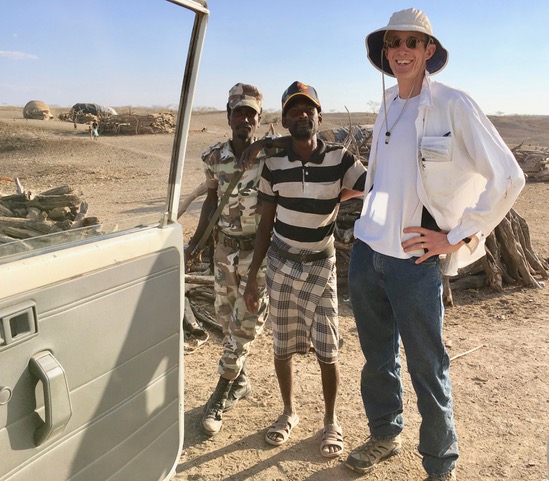 Pattison pursued an odyssey of ‘Fossil Men,’ will discuss it for Library’s Tuesday Scholars

When Kermit Pattison, of St. Anthony Park, embarked on writing a scientific detective story—a case study—called “Fossil Men: The Quest for the Oldest Skeleton and the Origins of Humankind,” it was quite by accident.

“I actually began working on a different book about the evolution of human aerobic endurance,” Pattison, an independent journalist and former St. Paul Pioneer Press reporter, told the Bugle. “Then I happened upon the intriguing discovery of a 4.4-million-year-old skeleton nicknamed “Ardi.”

“The skeleton captivated me because it was so complete—and thus allowed me to explore the natural history of the human body from head to toe. It also had a dramatic discovery story: a bunch of idiosyncratic scientists as compelling characters and huge controversy.

He explained, “Ardi challenged much conventional wisdom about human origins and became another chapter in a decades-long series of blood feuds between rival scientific camps.

“Initially, I thought Ardi would be a minor part of the book but, as I became immersed in the topic, I slowly realized this was a better book than the one I had set out to write. After agonizing for a while, I junked the original topic and decided to focus on this instead.”

Pattison began work on the book in 2011, landed a book contract in 2014 from William Morrow (an imprint of HarperCollins Publishers) and submitted his final manuscript in 2019. The book was released in the fall of 2020.

“We actually wound up delaying publication for a few months because coronavirus hit just as the book was finishing final production,” Pattison said.

Although “Fossil Men” has yet to appear on any bestseller list, the publisher has told him his book has enjoyed solid sales, Pattison said. The book has also snared kudos from, among others, The New York Times Book Review, The Spectator, The Christian Science Monitor and the Twin Cities major dailies. Science News picked it as one of the best science books of 2020, Pattison added.

Pattison is scheduled to give a virtual presentation about “Fossil Men” from 1 to 2:30 p.m., May 11 as part of the Ramsey County Library’s Tuesday Scholars series. (To register for Pattison’s talk, visit the Ramsey County’s Library website http://rclreads.org or call 651-724-6001. After registering, you will receive a confirmation email containing information about joining the webinar).

Initially, Pattison thought he would finish his book within a couple years. However, he said, “Every time I turned over a rock, I found something interesting, a fascinating character, an intriguing bit of history or scientific question that I felt compelled to investigate. When you’re curious and determined to run down every lead, the years can pass surprisingly quickly.”

Pattison calls his book “a deeply-­reported case study about paleoanthropology, recounting the half-century saga of search, discovery and debate surrounding a primitive species named ‘Ardipithecus ramidus’ that lived in Africa 4.4 million years ago and is related to modern humans, or Homo sapiens.”

Completing his tome came with plenty of challenges for Pattison. Those included understanding the multidisciplinary science of paleoanthropology, whose specialties include anthropology, anatomy, genomics, geology and archeology.

“I had to grind my way through a lot of academic texts to gain a working knowledge of those fields.”

Another challenge: gathering his information.

“The most obvious challenge was distance,” Pattison said. “The scene of action was halfway around the world. I made two reporting trips to Ethiopia and had to face many bureaucratic hassles. I had to contend with language barriers, begging permits from unhelpful government officials and the lack of reliable communications and transportation.

“There were a couple of times when I had to enlist locals to help me flag down buses on remote highways in the Afar Desert. I climbed onboard despite being not entirely sure the bus would get me where I needed to go by nightfall.

“My last visit to Ethiopia came shortly after the country declared a national emergency due to civil unrest and I almost didn’t get a visa. Luckily, everything worked out in the end. I owe a great deal to the Ethiopians who helped me—and the kindness of strangers.”

The final challenge “was writing the damn thing,” Patterson said. “I had to make this huge saga accessible to laypeople with no background in these fields.”

He describes such non-­fiction writing as learning “as much as possible about your topic, and then deciding to leave 99 percent out of your book. The trick—and agony—is picking that small remainder that captures the essence of everything that you have learned.”

Despite the critical acclaim for “Fossil Men,” Pattison has no plans for a sequel.

“After years of immersion in this strange branch of science, I am eager to work on something completely different,” he said.

Scott Carlson is managing editor of the Park Bugle

A native of New England, Pattison is an independent journalist who has worked for, among others, the New York Times, GQ, Inc. and Fast Company, as well as some stints as a corporate, medical and tech writer. His book “Fossil Men” is available in bookstores and on the Internet.

Pattison and his wife Maja Beckstrom, a freelancer for the Bugle and also a former Pioneer Press reporter and now at Minnesota Public Radio, live in St. Anthony Park. They have three children, ages 15 to 21.