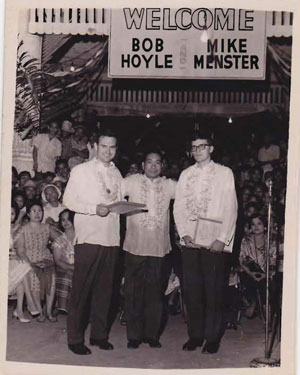 Twenty-one-year-old Bob Hoyle (right) and Mike Menster (left) are welcomed to the town of Dumangas by Ramon Durmendes, the mayor of the community. Hoyle was one of the first Minnesotans to be accepted into the Peace Corps 50 years ago.

His father thought he was crazy. His employer was baffled, and many who knew the quiet, rather retiring young man who’d recently graduated from St. Olaf College must have wondered why he was turning his back on a promising career to go spend two years in the jungle. But 21-year-old Robert Hoyle had heard President John F. Kennedy’s famous call to service, and he was about to find out the real meaning of “ask what you can do for your country.”

In November 1961, 50 years ago this month, Hoyle, who lives in St. Anthony Park, became one of the first two recruits from Minnesota to join the newly formed Peace Corps.

In September, Hoyle and his former Peace Corps colleagues met to reminisce and share memories as the agency celebrated its 50th birthday.

For Hoyle, the choice had been clear. “President Kennedy had called me!” he remembers thinking. How could he refuse? Now in his 70s, Hoyle smiles gently at the memory of the idealistic young man he had once been. “The ‘Ask not what your country can do for you’ message had electrified people,” he says. “I remember thinking, ‘If I don’t do this, I’ll always be sorry.’”

Hoyle was working as an industrial relations intern at Ford Motor Co. and had just been admitted to grad school at the University of Minnesota when he was accepted by the Peace Corps. After a few months of training, the young man who had barely traveled beyond the borders of his home state was on his way to Dumangas, a town on Panay, a small island in the central Philippines. His family had difficulty locating it on a map. “Eventually my dad gave his blessing,” recalls Hoyle, “but his first reaction was, ‘Where the hell are the Philippines?’”

Hoyle and his fellow volunteers had been chosen for their adaptability, open-mindedness and resiliency; and they needed whatever inner strength they possessed for their first days of adjustment to the new society. “All the training in the world doesn’t prepare you for the shock” of a new culture, he explains. There were the physical discomforts of a world where everything from the bus seats to the furniture to the dinner portions that were too small for the tall, sturdily built young American. And the disorientation of a country with 76 different languages and the dawning realization that Filipino English bore only a passing resemblance to the language he’d grown up speaking in Minnesota. And the psychology of a culture where public shame can be a deadly social deterrent. Everything was unfamiliar and needed to be mastered by the young volunteer.

Hoyle laughs when he recalls a mass meeting conducted in Filipino English where the subject under discussion was “galvanized tin sheets” used in construction. The trouble was, the Filipino pronunciation made use of the short i sound, transforming “sheets” into a word that the gently reared Hoyle had never before heard uttered in public.

But that was nothing to the shock that he felt when he asked the district supervisor of the local school why the man carried a 45-caliber pistol. The official told him, “There are a lot of mad dogs around here.” Hoyle pauses. “But he didn’t mean dogs.”

The shock of the new cut both ways. Hoyle remembers the uninhibited wonder with which his prospective students at the local school took their first look at blue-eyed Americans. The Peace Corps volunteers had what the smooth-skinned Filipinos found completely unfamiliar: European body hair. “We arrived in the central square, and the kids piled out of school. Right away, they started stroking the hair on our arms,” Hoyle explains. “A little girl looked in my eyes and asked, ‘Do you see blue?’ She’d never seen white people before.

“It was a time of discovery,” Hoyle says, and one conversation from that time has stuck with him. A Catholic missionary priest told him, “When you come here, you have a soft heart; but crying is of no worth to anyone. When you leave, you’ll have a hard heart, but one that understands. …You’ll be more effective then.”

Hoyle (left) talks with Minnesota Sen. Hubert Humphrey along with David Ziegenhagen, another Minnesotan (and former St. Anthony Park resident) who joined the Peace Corps at its beginnings. The man to the left of Humphrey dropped out of the corps, according to Hoyle.

Sargent Shriver, the dynamic first director of the Peace Corps (and, not-so-coincidentally, the brother-in-law of JFK) made the same point when he visited Hoyle’s remote village a year or so later. Hoyle and fellow volunteers made lunch for Shriver and then presented him with a long list of complaints about daily problems they were having. Shriver listened to the discourse, then told them frankly, “You guys didn’t think you were going to help anyone here, did you? Your help to this place will come years from now when you’ve become the leaders of a more informed American foreign policy.”

Although Hoyle eventually created close ties with the villagers—friendships that now extend to the second and third generations of their families—he also recognizes that Shriver’s words were prophetic. Hoyle went on to a long career of international service. Until his retirement in 2005 he was the head of the International Institute of Minnesota on Como Avenue, a job he enjoyed so much that he says, “They paid me a salary for doing just what I wanted to do.”

He also spent years organizing international aid projects for nongovernmental organizations. At least one local businessman benefited directly from Hoyle’s work. Mahmoud Shahin, the proprietor of Lori’s Coffee House and Mim’s Café on Cleveland Avenue, grew up in Halhul, a town on the Palestinian West Bank. The health clinic he attended as a child had been built decades earlier under Hoyle’s leadership, by the Lutheran World Federation. Hoyle remembers showing Shahin photos taken of the opening ceremonies at the clinic. Shahin was amazed to recognize several of his relatives among the dignitaries. Then he pointed to an unfamiliar figure in the photo and asked who it was. “That,” responded Hoyle, “was me!”

Bobby Hoyle and his wife, Karen.

At their 50th reunion, Hoyle says, “Everybody agreed that we Peace Corps volunteers got more than we gave. The experience gave me confidence. … Once I’d been in the Philippines, [if] the subject [was] the developing world, I felt I could hold my own with anyone.”