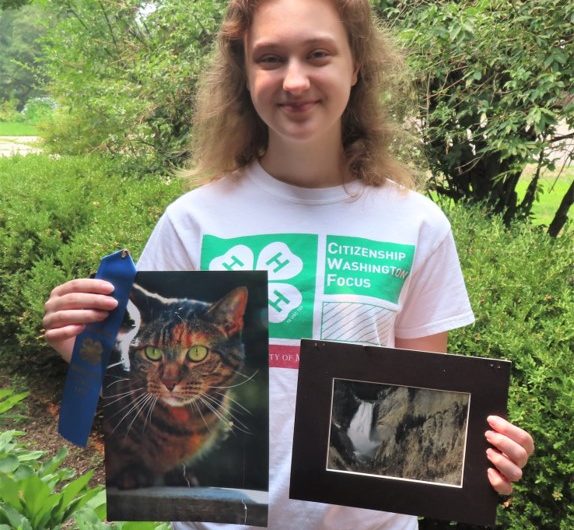 PEOPLE IN YOUR NEIGHBORHOOD: Katrina Sweet

From age 5, 4-H was a big part of Katrina Sweet’s life, with the organization helping teach her many skills and an important life lesson.

4-H, a U.S.-based youth development and mentoring organization, is affiliated with more than 100 public universities and has local clubs throughout the country.

Sweet, now 20 and a junior at Minnesota State University-­Mankato, joined 4-H as a kindergartner at St. Anthony Park Elementary School.

Growing up in St. Anthony Park, she followed in the footsteps of her mother Mary Lou—who was raised in a rural community in western Minnesota—and two older siblings, Medora and Russell.

“With both siblings in it, I was really excited to be in it,” Sweet said of 4-H. “You learn a lot of skills doing different projects—individually or with a group. There are a lot of opportunities—STEM (science, technology, engineering and math) and arts and crafts.”

Sweet developed interests in sewing, dance, music (playing trumpet), musical theater and photography in 4-H and while a student at St. Paul Conservatory for Performing Artists, Roseville Area High School and the project-based Avalon Charter School, where she graduated in 2019.

Those interests led to Katrina’s appearances at the Ramsey County Fair in Maplewood and the Minnesota State Fair, where she earned blue ribbons among 4-H contestants in photography, fashion revue and illustrated presentation.

Katrina’s illustrated presentation, rather than a simple how-to lecture, was on the history of the Stonewall Riots, how they led to the first gay pride parades and how they evolved over time.

Sweet remembers her 4-H years fondly, especially the summer camp week spent annually at the club’s Bay Lake Camp near Deerwood. There, she could canoe, kayak and swim—among other activities—and meet kids her age.

“You learned a lot about leadership,” said Sweet, whose years as a camp counselor at Bay Lake were cut short because of Covid-­related shutdowns since 2020. “A lot of things helped with leadership, like completing a task and team building games.”

Among her team building activities were making fleece tie blankets for an animal shelter, creating an assembly line to make sandwiches for a homeless shelter and making Valentine’s Day cards and cookies for a nursing home.

Katrina said she also learned life skills such as performing outside one’s comfort zone, learning to talk with strangers, being open-minded and becoming familiar with other cultures. In one case, Katrina attended a Washington, D.C., retreat with members of 4-H clubs from rural areas.

One skill-building lesson at camp particularly resonated with Katrina. Participants were blindfolded and asked to walk through a maze using their hands to guide themselves along a roped course. Whenever they needed guidance, they could raise a hand to request a counselor. Those who asked the most questions completed the maze more quickly.

“Some kids were really stubborn. They didn’t raise their hands and were really confused,” Sweet recalled. “That taught us that a lot of time you have to ask for help. You don’t have the same perspective as someone else. That’s something that I’ve really taken with me: It’s OK to ask for help.”

Lesson learned for this philosophy major who is interested in social justice and community organizing.