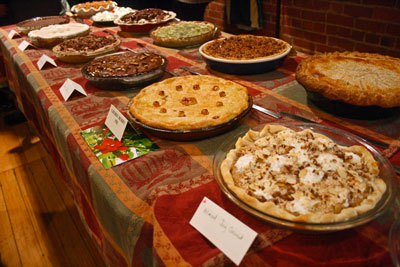 Twenty-three pies—13 sanctioned and 10 unsanctioned—were entered in the Comstock family’s 2014 pie baking contest. The pies ranged from sweet to savory and traditional to original. Park Bugle photo by Marina Lang

The 23 pies lined up in two straight rows on the front table at Claddagh Coffee & Café on West Seventh Street, St. Paul, had names as alluring as the pies themselves:

The pie contest moved out of the family home this year and into Claddagh Coffee & Café, where more than 50 people gathered for the Nov. 28 event. Park Bugle photo by Marina Lang

It was the Friday after Thanksgiving, and 50-plus people—ranging from tots to 60-somethings, some holding plastic divided trays to separate each diminutive piece of pie—stood ready to taste and rate their top three choices.

This was the 2014 version of the Comstock family’s annual pie contest, a tradition that began in Iowa City in 1976. That’s when Verne Comstock Sr., the patriarch of the Comstock clan—a family of six kids who grew up near Langford Park in St. Anthony Park—challenged his four daughters and two daughters-in-law to make the best pie. It was five years before granddaughter Sunny Comstock was born, but her early memories of Thanksgiving are of the “wonderful chaos” at her Aunt Pam’s home in Iowa.

“All the kids would come and all the kids’ spouses and children,” she said. “We’d be sleeping on the floor and fill the whole house.”

Travelers from Minnesota and Texas would arrive on Thanksgiving Day and commence creating their pies. Thanksgiving supper was soup and then the pie contest began. “It was just chaos, madness in the kitchen,” Sunny said.

Judy Comstock, who is married to Verne Comstock Jr., won that first pie contest with a Poor Man’s Pecan Pie. It was made with crackers, walnuts and a Crisco crust, she said.

“All of my sisters entered a pie,” Verne Jr. said. “It was very competitive. The men were the judges. At the end, Dad stood on a chair and announced the winner. [My sisters] couldn’t believe they lost.”

Rita and Matt Comstock, Barb Soukop (sister of Manny and Verne Jr.) and Sunny Comstock in 1990.

That first win was contested, Judy said (with a smile), and she hasn’t won since.

The contests continued in Iowa City for almost three decades. The pie took top billing on Thanksgiving Day and the traditional turkey dinner was served on Friday.

“One year the whole family came down with the flu,” Verne Jr. said. “That was the last one in Iowa.”

That was 2005. If you look at the traveling plaque the family engraves each year with the name of the winner, you’ll see that there was no contest in 2006. “We were in transition,” he said.

In 2007, Becky and Manny Comstock began hosting the pie contest in the family home on Langford Park, where they now live, and the contest moved to the Friday evening after Thanksgiving. Somewhere in all of this, the family also kicked family members with doctorates off the judging panel. Verne Sr., a Ph.D. in agronomy who taught at the University of Minnesota, judged for many years alongside his son-in-law Jim Ehrhardt, a Ph.D. in nuclear physics.

Then one year, neither of them judged and “it went really fast,” Sunny said.

The contest grew to include more than just family, and the Comstocks created two categories: sanctioned (family members) and unsanctioned (nonfamily members). Winners of the unsanctioned category receive a traveling trophy of a chef holding a rolling pin to display in their homes for a year.

The first Comstock pie contest was held in 1976. Though no more than eight pies were entered, the competition was fierce; entrants clawed through ballots to confirm Judy Comstock’s premiere win (which was contested, she said). Park Bugle photo by Marina Lang

Matt and Rita Comstock (son and daughter-in-law of Judy and Verne Jr.) kept the family plaque hanging in their Cincinnati, Ohio, home from 2001 through 2008. They say the space on the wall and the nail the plaque hung on are still there, waiting for the family’s next win.

Verne Sr. died in June, and this year the contest moved into a rented location to accommodate the crowd. Despite the new digs and more room, Becky said the pie count was low. Last year, there were 34.

As three teams of ballot counters huddled in corners of the coffee shop, tallying the participants’ picks for best pie of 2014 (it’s ranked choice voting: 3 points for first picks, 2 points for second and 1 point for third), Comstocks and their guests discussed their theories on what makes a winning pie.

“Generally, anything out of the norm,” said Sunny, who operates her own pie company, Sunny Lane Pies, with her sister-in-law Lane Cook (the Neighborhood Café, 1570 Selby Ave., sells their pie or you can find Sunny Lane on Facebook, facebook.com/SunnyLanePies). She declined to enter the contest this year after baking dozens for customers two days earlier.

Her dad, Manny, said it’s a balance between the crust and the filling: “A perfect crust is important,” but that crust has to be appropriate to the pie. “The crust is there to support the filling,” he said.

His recipe for a stellar crust includes leaf lard and vodka, instead of water. “Too much water makes the crust crumbly,” he explained. “The vodka evaporates. If you use vodka you can more easily manipulate the crust.”

Twelve-year-old Sophie Comstock’s friends Sam Wickler-Marchand, William Gray and Aseem Gidwani helped her create a pecan pie (under the guidance of Sophie’s mom, Sunny). They sang the praises of cutting ice-cold butter into little bits to help create a delicious crust, something they had learned about earlier that day (and one of them had a bandaged finger to prove it).

Jessie Rise, a friend of David Comstock, entered a coconut pie for his first entry into the unsanctioned category of the contest.

“I grew up hearing of this legacy event,” he said, “and saw the plaque hanging in David’s house. I’m glad to be here.” His crust? Store-bought, ready-made.

The night came to a close after the judges tallied the votes. Last year’s winners, Manny Comstock (sanctioned) and Joan Snyder (unsanctioned), donned black commencement gowns and aluminum-foil crowns, carried the plaque and trophy they had each held in their homes for the past year, and walked to the front of the room under a canopy of wooden spoons held by participants who naa-na-na-na-naa-naa’ed the song “Pomp and Circumstance.”

After a brief speech by each, they passed the plaque and trophy to this year’s winners: Layla Comstock (sanctioned, she’s the 10-year-old granddaughter of Verne Jr. and Judy) for her Root Beer Float pie, a cream pie with real root beer as an ingredient, and Michele Dao (unsanctioned) for her Crack pie, a gooey, buttery, creamy pie with an oat cookie crust.