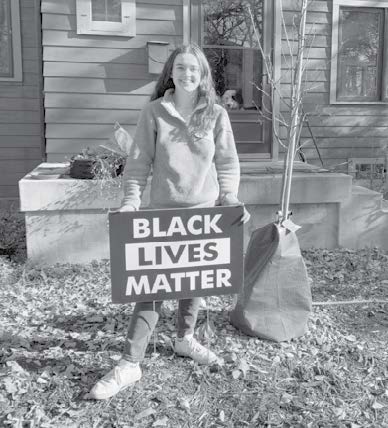 (Editor’s note: Isabel Meyer-Mueller, a lifelong St. Anthony Park resident, is a senior psychology major at Macalester College. She wrote the following paper for one of her courses, “The Psychology of Black Women.” Her report examines the history of segregated neighborhoods, their impact on Black women and what communities like St. Anthony Park can do to help.)

Saint Anthony Park has a lot of Black Lives Matter signs scattered in our front yards, but why are there so few Black people?

Although the abundance of signs could be an indication that SAP is a welcoming and diverse place, the reality is that we are 76 percent White and 7 percent Black and African American residents. Perhaps instead, these signs demonstrate “performative allyship” or showing solidarity in a way that is not actually beneficial to a marginalized group.

Similarly, this summer there were huge debates on the neighborhood listserv about changing the name of Buford Street because it is unclear if it was named after Abraham Buford II, a Confederate soldier, or John Buford Jr., a Union officer. Although inclusive language matters, is changing the name of a street with unclear origins the best way we can help Black Americans? What can we actually be doing to help? How can we harness our privileges to make impactful change?

First, I think it is important for us to understand the history of our neighborhood. During the 1930s, the Homeowners Loan Corporation was established with the goal of refinancing mortgages. But in doing so they drew lines encompassing Black communities and stated that those neighborhoods were “unsafe for federal investment.” This caused rates of home ownership, house values and credit scores among residents to decrease significantly. This practice is known as redlining and its implications continue to be a barrier today for Black Americans buying homes.

Similarly, the National Housing Act of 1934 continued this racial discrimination by denying mortgages to African Americans, making access to neighborhoods like ours almost impossible. The racial makeup of our neighborhood can in large part be traced back to the systematic racism on both the federal and local levels intended to keep African Americans contained in specific domains of public life.

Segregated neighborhoods and exclusion from housing markets have huge impacts on the social, mental and economic well being of African Americans, as it directly influences schooling, safety, job opportunities, insurance costs and ultimately wealth. Furthermore, the burden associated with this problem is disproportionately placed on Black women.

Black women often function as the head of the household for Black families. More than 80 percent of Black mothers are contributing at least 40 percent of the family’s income and three-­quarters of those women are bringing in the family’s sole income. Furthermore, Black mothers are far more likely to participate in the labor force than their White counterparts and, similarly, are often expected to bear the brunt of a family’s economic, housing and childcare responsibilities. Therefore, discriminatory housing practices often impede these mothers’ ability to provide for their families.

One specific instance where this discrimination is clear is when Black women attempt to flee intimate partner violence and face severe obstacles to safe housing. As women attempt to leave abusive homes, many are forced to choose between unsafe housing, homelessness or remaining in abusive relationships because of discriminatory housing practices.

It is also important to note that Black women are being disproportionately impacted by these discriminatory practices and their lasting consequences during the COVID-19 pandemic. The current public health crisis has brought with it severe housing instability, which has huge implications for Black women. Black women face evictions at twice the rate of their White counterparts. Similarly, while 73 percent of White families own their homes, only 41 percent of Black families are homeowners. During this pandemic, Black women are especially at risk of losing their jobs and slipping further into housing instability because of their overrepresentation in low wage jobs that are most vulnerable to layoffs.

Racism related to housing is a systemic issue, deeply rooted in American society. It can be difficult to know how any one person can make a difference. One of the most impactful things we as a community could do, would be to create more affordable housing options.

However, as an individual, it is difficult to implement those changes. Instead, you can help by donating money to organizations like Women’s Advocates of Minnesota, which aims to provide women fleeing domestic abuse with housing and resources.

Another impactful action is making sure that your voice is heard through your vote. Under President Barack Obama, in order to receive federal aid, communities were required to submit an analysis of the racial demographics of the area and plans to address segregation. Ben Carson, the current secretary of housing and urban development, revoked the rule under the Trump administration, signaling the difference elected leaders can make on this issue for better or worse.

For as long as neighborhoods are segregated on racial lines, it will be impossible for Black Americans and specifically Black women to thrive. It is important to think about the implications of segregated neighborhoods and how we can harness our privileges to make impactful change.

Graff, G. (2019). The enormous price we have paid for allowing the explicitly racist policies of federal and local governments to segregate America. “The Journal of Psychohistory,” 47(1), 37-47. Retrieved from https://search.proquest.com/docview/2244601923?accountid=12205

Morris, L. O. (2020, July 24). A wave of mass evictions is inevitable, and Black women will be hit the hardest. Retrieved Oct. 21, 2020, from https://thehill.com/blogs/congress-blog/politics/508897-a-wave-of-mass-evictions-is-inevitable-and-black-women-will-be