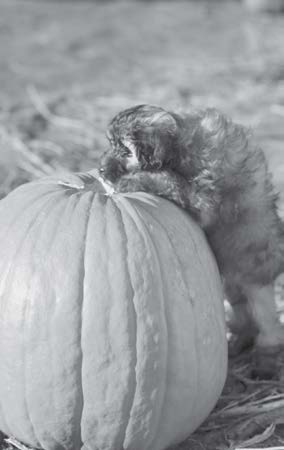 We’d been researching and visiting dog shelters for two years and I’d had enough.

When my wife was out of town visiting her mom in Russia and then a friend in Pittsburgh, I enlisted my 8-year-old son to do research with me on the Internet. We entered traits we wanted in a puppy and came up with a short list of breeds within an hour.

Two breeders were in contention for our puppy purchase. The first one was a Texan, who had a Norwich Terrier that he offered to fly to us for few extra hundred dollars. The second breeder was in Indiana, only an eight-hour car trip away to see her Lowchen. I decided this breed would fit my family, a dog that is playful and free of potential genetic ailments. Plus, I wanted my son to see where puppies come from.

On the drive down to the breeder’s home, my son and I spent the night at a Holiday Inn Express on the edge of a soybean field. The next morning, we drove down a quarter mile dirt driveway, past some other crop fields and parked in front of a red barn with an old tin Coke sign.

The breeder and I had already talked about naming the dog so it would be part of her papers. We decided on “Filly,” which isn’t short for anything. But that name fit the breeder’s desire to have a gambling term associated with every pup in her litter. (Note: I recently renamed Filly to Philly.)

Once inside the farmhouse, it didn’t take us long to start playing with Philly. In reality, it was just me who tried to play with her while my son laid down and stuck his head and arms into the whole litter.

After a few minutes, the breeder took the pup out of my hand and explained that since our pup was only seven and a half weeks old, she may not be as playful as expected.

I already knew Philly was very young but told the breeder I knew the best bonding occurs with humans and younger puppies. A neighbor gave me that bit of wisdom.

Since then, I’ve pondered about the long history of dog and human interaction. Some theories speculate that dogs evolved from the gray wolf between 10,000 and 30,000 years ago.

One theory holds that there were two major domestication events resulting in Eastern and Western Eurasia variations of dogs, while other scholars believe there were hundreds.

The Hollywood movie “Alpha” portrays dog domestication as a single incident between an injured teen and an injured wolf some 20,000 years ago. Seeing they were in similar straits, the injured teen worked to domesticate the animal for mutual advantage.

Some scholars believe that dog domestication resulted in co-­evolution and has changed our world more than anything since.

Whatever the origins of dog becoming man’s best friend, my son and I felt bad hearing Philly whimper as we drove out the driveway knowing this would be the last time she would see the rest of her pack.

I stopped at the PetSmart in Eau Claire, Wis. two hours before we reached home and did a Facetime chat with my wife. My son gave away our surprise with a big smile. We panned the phone camera to show my wife and her friend an image of tiny, tiny Philly crossing the snowy parking lot.

Back at home, I spent the first night in the basement sleeping next to Philly, who was in her shiny new crate. The daily routine included taking Philly outside for overnight potty breaks, a bit of a push in the wake of early snow in October. Not surprisingly, this routine left me with the droopy-eye complex that is common to parents of newborns.

In the early weeks, Philly was biting a lot and, at one point, I contacted a pet behavioral psychologist from Minnetonka. Unbelievably, someone from her staff got right back to me with full pricing for the initial consultation and assurances that Philly’s behavioral issue could be addressed. The assistant also mentioned the possible use of medication.

I recoiled at that suggestion, knowing the over-medication craze that is sweeping America. I figured we could weather Philly’s biting tendencies and seek out answers on the Internet to address this problem.

We enrolled Philly in puppy classes and the instructor encouraged age appropriate play with other dogs in the class as well as in our neighborhood. The thought of setting up playdates became a new source of anxiety. Luckily, a neighbor across the street had gotten a puppy a few weeks earlier. Setting up puppy playdates is much like setting up playdates for the kids.

Outdoor play was not without its problems. One day, we let Philly roam a bit and this led to her first visit to the veterinary emergency room at the U of M-St Paul campus.

“Something’s stuck in her throat,” I said to the skeptical admission clerk as the dog bounced around in the waiting room behind me. I filled out HIPPA forms out and made sure my wife was listed a contact in case her results needed to be shared with someone else. In less than 10 minutes, I was able to take her home and monitor her there. Within an hour, I helped her dislodge whatever it was by turning her upside down.

Today, Philly is displaying some teenage behavior: Tuning me out when called, willfulness and making some bad choices in her eating habits. She’s developed a taste for rabbit poo nuggets that have been frozen by the Minnesota winter.

Despite this gross behavior, I still feel Philly is entitled to bask in human comforts like the couch, YouTube videos, the fireplace, warm clothing and lots of company whenever possible. The Internet is filled with posts on the dangers of humanizing your dog – something I didn’t expect to embrace. Now, I’m starting to see how this could be the next step in dog evolution.

John Horchner
If you're like me, you're always looking for opportunities to continue to learn, travel and write. I hope to never lose the spark that made me interested in writing in the first place - finding real places with real people and personality that make me want to pay a visit. Thirty years ago, I started a small publishing company the day after landing in Providence, RI for an overnight trip. Starting from there, I worked on a variety of publications from Honeymoon Destinations, MeetingSource to Active Travel Index. Today, I hope to fill my days with interesting writing assignments – and books, lots of books!