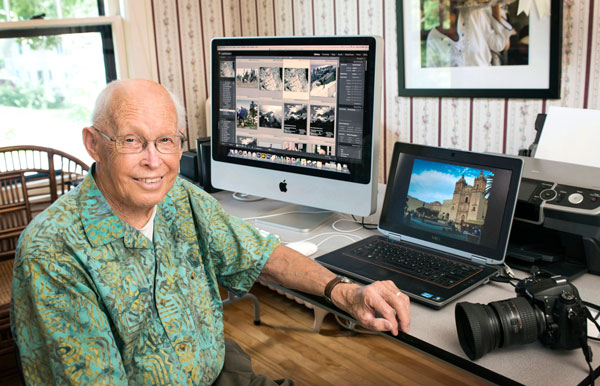 Photo show will trace a lifetime of journeys

Bob Megard will display his photos at 1666 Coffman in September. Photo by Mike Krivit

A photography show at 1666 Coffman this fall will offer a virtual ramble over mountains as seen through the lenses of longtime St. Anthony Park resident and University of Minnesota professor Bob Megard.

Nearly 60 photos have been selected from an estimated “five to six thousand,” Megard said while flipping through images on a large computer screen in his home several weeks before the show.

At that time, a few of the works still hung on the walls of the home Bob shares with his wife, former St. Paul City Council member Bobbi Megard. A pair of Mexican folk dancers presided over the entryway, evoking fond memories of the Megards’ many trips to the Oaxaca region.

A dining room wall featured a trio of Mexican elders engaged in deep conversation. “I like the composition because everybody’s listening to an old guy,” Bob remarked with a chuckle.

Other than annual entries in recent community shows at St. Matthew’s Episcopal Church, Megard has never had a public gallery show. The trio of elders boasted a ribbon from last year’s show, which gave him some encouragement, he said.

Peg Houck, who has organized the St. Matthew’s shows for many years, has set up the Megard show at 1666 Coffman, a senior residence on Larpenteur Avenue which houses many retired university professors. The show will be open to the public, with an opening reception Tuesday, Sept. 16, 4-6 p.m. in the gallery. For access to the show, call Houck’s unit from the entrance to be buzzed in. An advance call is appreciated, so that Houck can expect to let visitors in. Houck’s number is 651-645-4453. You can also call Elizabeth Shippee at 651-645-6992 to be let into the building.

Megard’s interest in photography dates back to his college years at St. Olaf College in Northfield, when he worked in the campus news bureau as a photographer and darkroom technician. He spent summers at Glacier National Park, working at the Many Glaciers Hotel. That’s where he met Bobbi, who worked and hiked with him there while they both earned money for college.

Bob graduated from St. Olaf in 1956, earned his master’s in biology from the University of New Mexico, and completed doctorate studies in zoology at Indiana University in 1962.

Bobbi started at the University of Minnesota, transferred to the University of Oregon, then joined Bob at Indiana and earned a master’s degree. They moved to Minnesota when Bob joined the U faculty shortly after graduating from Indiana.

“We went to Glacier Park last summer to celebrate the 100th anniversary of Many Glacier,” Bob said, noting that the National Park Service is approaching its own centenary. He said some of his Glacier pictures, a few of which will be in the 1666 Coffman show, can be compared with Park Service photos from other years, contributing to the natural history of the park.

After many years living in St. Anthony Park, the Megards are handing off their Hythe Street home to their daughter and moving to the new apartment building at Como and Doswell avenues when it is completed this fall.

The photo show will occupy two rooms at 1666 Coffman, Bob Megard said. One room will be devoted to pictures from Oaxaca, with the other room tracing the couple’s travels to Iran and China as well as locations closer to home.

Many of the photos were shot on film, long before digital cameras became available, although Megard has happily gone digital in recent years. He said he has spent many hours scanning and editing those older photos, using Adobe Photoshop Lightroom software. He demonstrated at his computer, running a mouse over a graph to shift light and color in one dramatic landscape from southern China. “It’s great fun!” he exclaimed.

The pictures from Iran date to an archaeological expedition in 1963, when the Megards spent a summer working with University of Minnesota ecology professor the late Herb Wright, who was collaborating with anthropologists at the University of Chicago on an early climate study at Lake Zeribar.

“He had a project finding out what the climate was like during the time of domestication of plants an animals,” Megard explained. Megard’s role was to examine core samples drilled from beneath the site. “I looked at the stratigraphy of microscopic animals going back about 30,000 years,” Megard said, adding that some of the Lake Zeribar core samples ended up in collections of the University of Minnesota.

While he was there, he shot pictures of mountains. In fact, Megard seems to favor mountains as subjects for his art. In addition to Glacier and Zeribar, mountains dominate photos taken more recently in China and serve as a continuous backdrop to the portraits from Oaxaca, as well.

His wife noted a progression through the years, though: “He has gone from being a landscape photographer to taking pictures of people,” Bobbi said. “There’s been a gradual change in which he thinks people are worth taking pictures of,” she added, drawing another chuckle from Bob.

Few animals appear in Megard’s photos, but there are some birds. Bobbi explained that after her grueling but successful campaign for city council, she promised Bob they would take a vacation to the venue of his choice, and he picked Baja California, where birds perching on cacti attracted his eye.

Megard’s show will include landscapes taken in Grand Marais during “Shoot, Print, and Frame” workshops led by Laurie Hernandez. He credited Hernandez with helping make the final selections for the 1666 Coffman show, as well.

His son-in-law Jeffrey Tranberry, a graduate of Minneapolis College of Art and Design now working for Adobe in Arden Hills, has also helped him prepare the show, Megard said. “He really has stimulated my interest in digital photography,” Megard said.