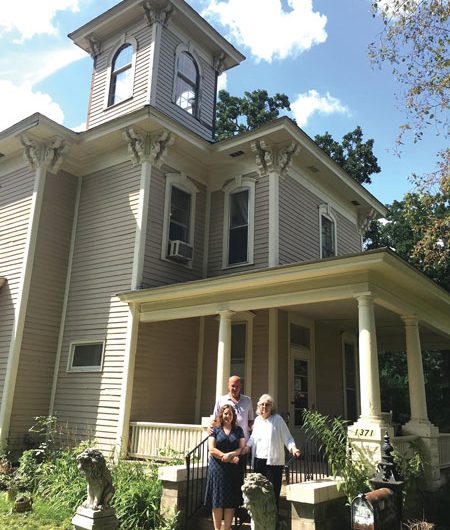 Pioneer home has a new lease on life 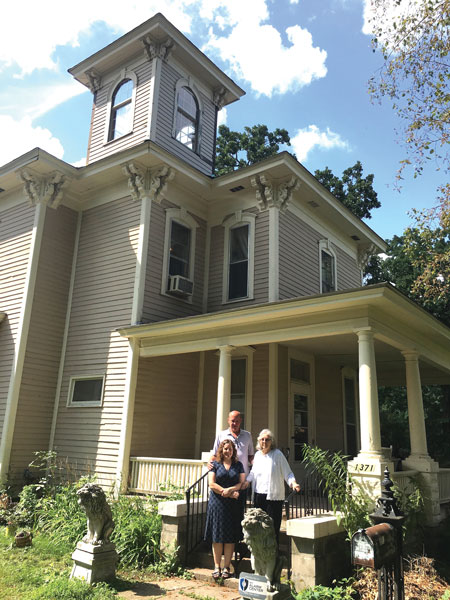 The residents of 1371 Nebraska Ave.: Sarah Dye, left;  her mother, Carol;  and her husband, John Coulter. Photo by Roger Bergerson

Sarah Dye acknowledges that she’s not always sure what she and her husband, John Coulter, have gotten themselves into in restoring the 1872 villa they’ve acquired in northwest Como.

“This is the type of property that young people love but can’t finance and some older people could finance but are too prudent to pursue,” she says of the home at 1371 Nebraska Ave., a few blocks from the Minnesota State Fairgrounds.

One thing’s certain, the elegant home is a reminder that pioneer George Hazzard did all right for himself by marrying into the Hoyt family all those years ago.

The property, which at the time included 10 acres of land, may have been a wedding gift from Lorenzo Hoyt to his younger sister, Hannah, when she and Hazzard married in 1867, both age 21. Five years later, they moved into their new Italianate home, an architectural style highly favored at the time, and proceeded to start a family that would eventually include six children.

Lorenzo was a prosperous farmer and justice of the peace for Rose Township. Like most of his neighbors, he also was a land speculator, platting Hoyt Avenue, named for his father, Benjamin, 50 years before any homes were built on it.

Hazzard, by contrast, was 18 years his junior and far from established in the world, but he must have impressed Lorenzo as a go-getter. He’d gone to work at age 14 as a cabin boy on the steamboats operating out of St. Paul on the Mississippi and St. Croix rivers.

In fact, it is possible that is where he and Hannah met. The Hoyts were Methodists and active in the temperance movement. Along with many others, they sometimes took a steamer from St. Paul downriver to attend meetings at Red Rock Camp, a Methodist facility near Newport.

At any rate, the Hazzards settled down and George became a successful agent for steamboat and railroad companies, before starting his own real estate business in 1883. One of his residential developments was the Foundry Addition, platted in 1885 at Front and Western avenues.

Hazzard apparently made and lost several fortunes in an era when financial panics periodically swept the region and country. During one such downturn in 1886, the Hazzards departed the villa for presumably more modest accommodations a mile or two to the south in “Hamline,” as the Midway district was known.

To look after the few head of livestock left behind, the Hazzards hired a caretaker, a young man who died tragically a year later at the hand of a drifter he befriended.

In the coverage of the murder, a newspaper reporter described the home as being in a “lonely and deserted” setting, the “road leading to it from the turnpike (Hamline Avenue) overgrown with weeds.”

If so, it must have been an anomaly, because at least three successful farmers lived in close proximity, Lorenzo Hoyt nearly 300 yards to the north of the villa, in the vicinity of Hamline and Hoyt avenues, Joshua Robertson to the east and son August immediately south.

Hazzard had been using the home as loan collateral and lost it to foreclosure in 1889, but he was by no means finished in business or public affairs. As a Ramsey County commissioner, he was one of the masterminds behind Ramsey County’s successful bid to permanently locate the fairgrounds on what had been the county Poor Farm.

In addition, as mining interests threatened the long-term viability of the Dalles of the St. Croix River, he played a key role in convincing the Minnesota and Wisconsin legislatures to establish Interstate Park at St. Croix Falls around 1900.

A succession of owners followed over the decades, many of whom modified the structure to fit their needs.  In fact, there has been such a bewildering array of remodeling projects that current owner Coulter says it would be nearly impossible to restore everything to the original design, even if they aspired to do so.

One casualty over time was a formidable tower at the top of the house that presumably succumbed to the wear and tear of the elements and deferred maintenance.

Pieces of the 10-acre parcel were gradually sold off until it was down to a single acre in 1925, still a much bigger property than the sites in the adjacent housing development being carved out of August Robertson’s former farmland.

In 1951, newly founded North Como Presbyterian Church bought the home and conducted services there for several years. After the church moved out, the residence was converted to a duplex.

Ron Dorumsgaard, the owner prior to Dye and Coulter, bought the place in 1986 and in 1990 it became Como Villa, one of the first bed-and-breakfasts licensed by the city of St. Paul. Teaming up with his father in 2004, Dorumsgaard built a replica of the home’s old tower, a formidable undertaking, and hired a crane to lift it into place.

At about the same time, Dye and Coulter had moved into the neighborhood, and one day Sarah happened upon the villa while on a walk, not having known it was there.

“I was astonished to behold a charming, old-fashioned house like this tucked among houses of such a different style,” she recalls. “It made a strong impression on me.”

And a lasting one. More than 10 years later, the Nebraska home came on the market at the same time that Dye and Coulter were contemplating a move from their home near Lake Como.

Dye convinced her husband they should put aside most of their search criteria and purchase it.

“In many respects, the house is the opposite of what we needed, but it is beautiful, spacious, solid and well-built. The floors are still nearly dead level, and the high ceilings (11 feet downstairs, 12 up), rounded windows and bay windows are graceful.”

Dye also acknowledges that there are enough repair and update projects to keep them occupied for a long time, but she’s smitten.

“When I drive up into the driveway, I feel like I’m suddenly at a farmhouse out in the country where I can enjoy the luxury of privacy out in nature.”

Of course, privacy can be overrated and she says that if you’re strolling by, stop in and she’ll show you around.

Roger Bergerson shared his history columns with the Bugle for the last decade. Roger submitted this column the night before he died. Rest in peace, Roger. Your voice will be missed.