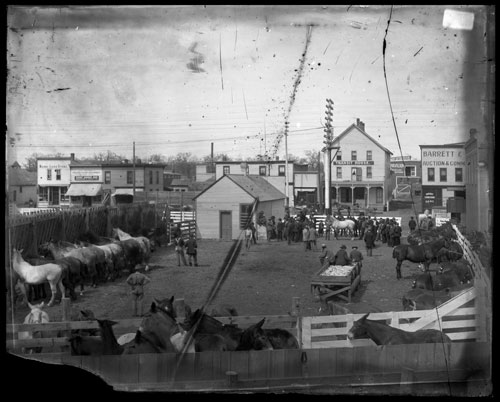 Plodders, trotters, he sold ’em all

The Barrett & Zimmerman auction pens circa 1900.
Photo courtesy of the Minnesota Historical Society

Horsepower, in its original form, helped build the economy of the Upper Midwest in the late 19th century, and St. Paul was home to one of the largest horse-trading markets in the nation.

Dealers chose to locate near the intersection of Prior and University avenues in the Midway district because it was adjacent to the yards of the Minnesota Transfer Railway. This was a cooperative venture by nine railroads to coordinate the movement of freight through the Twin Cities.

And the biggest wheeler-dealer of them all was Moses (“Mose”) Zimmerman, who along with his partner, John D. Barrett, made a fortune selling horses and mules when lumbering and railroad building were at their peak.

For that matter, nearly everybody relied on horses at the time: fire departments, dray operators, farmers, construction companies, affluent people needing everyday transportation. The St. Paul Street Railway alone needed 800 horses to pull its cars, replacing the animals on the average of every two years.

Zimmerman and his salesmen crisscrossed the Western states to acquire horses, as well as pasture land where herds could be assembled for shipment to St. Paul. In fact, so adroit did the partners become at land transactions that they set up a companion firm to handle real estate. At one time, the company owned 30,000 acres in Wisconsin alone and more than 100 farms in Montana.

Moses Zimmerman in 1922
Photo courtesy of the Minnesota Historical Society

Even as cars, trucks and tractors became more popular, the onset of World War I in 1914 caused a sharp upswing in business for Barrett & Zimmerman and its peers. Agents from the British and French governments came to St. Paul to purchase horses and mules for shipment to the European battlefields. Later, when America entered the fray, the U.S. government did the same.

“At the height of the World War, we sold $1 million worth of horses and mules a month,” Zimmerman recalled in a 1922 newspaper interview. Given that the St. Paul Fire Department was paying $300 apiece for horses in that era, the dealer was clearly talking about transactions totaling thousands of animals.

And what about the current state of the horse business? “All shot to pieces by the gas engine,” Zimmerman replied.

A spectacular fire in 1922 didn’t help. On the Fourth of July that year, boys with firecrackers were tormenting goats in the Barrett & Zimmerman pens on University Avenue. In the process, they set off a blaze that was fanned by a brisk wind.

An estimated 5,000 people watched as 10 St. Paul engine companies and two from Minneapolis battled the fire, which quickly consumed the stables, sheds and headquarters of the horse traders, as well as an adjacent lumberyard and a commercial/residential building. Police and bystanders were able to save 70 horses, but other animals, including some of the hapless goats, were lost.

It appears that the stables were partially rebuilt, because the Barrett & Zimmerman horse-trading business continued at the site, although on a reduced scale. Real estate became the firm’s primary focus. Zimmerman was a big booster of the 1923 boxing match between champion Jack Dempsey and St. Paul’s own Tommy Gibbons in Shelby, Mont. His company owned a lot of land there and he felt the fight would create interest in the area.

He wasn’t about to give up on horses, though.

“The horse-trading business is picking up again,” Zimmerman told a newspaper in 1929. “There has been a bigger demand for good horses in the past year than since the war. Transfer companies are going back to the horse for short haul jobs and the small farmer can buy a horse cheaper than he can raise it.”

It was probably wishful thinking, but the statement showed where Zimmerman’s heart was.

Roger Bergerson chronicles our remarkable past regularly in the Park Bugle.