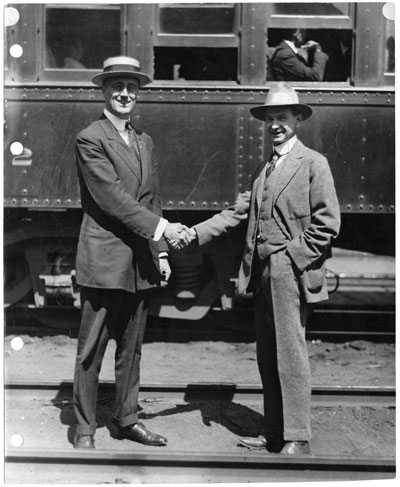 During his 1920 campaign for governor, Hodgson campaigned with the Democratic Party’s candidate for the vice-presidency, Franklin Delano Roosevelt. Both lost. The following year, Roosevelt was stricken with polio at the age of 39, leaving him paralyzed from the waist down.

One of St. Paul’s most remarkable characters in the first decades of the 20th century was Laurence Curran Hodgson, newspaperman, poet, four-time mayor and a true people person if there ever was one.

What else would you call a fellow said to be on a first-name basis with 15,000 Minnesotans?

“Larry Ho,” as he was known far and wide, was a renowned and sought-after public speaker, snappy dresser and staunch Democrat. A man with a famously sunny disposition, he moved nimbly back and forth between journalism and politics without ever succumbing to the cynicism that can be an occupational hazard in either profession.

Hodgson was born in Hastings in 1874, the son of a district court judge. He got into the newspaper business delivering the Hastings Democrat at the age of 14 and gradually worked his way into the newsroom.

After moving to Minneapolis and attending the University of Minnesota — for one day  — Hodgson decided that college wasn’t for him and went downtown to see James Gray, managing editor of the Minneapolis Times. Gray had published a few pieces of writing that Hodgson sent him from Hastings and gave the young man a job.

It was Gray who bestowed the moniker by which Hodgson was known for the rest of his life. As the cub reporter was turning in what would be his first signed feature, his pencil broke after the first “o.” Gray said, “Better let it go at that, Larry Ho.”

Before long, Hodgson headed across the river. Why St. Paul? He once claimed that after reading that a city woman “had hit upon the happy scheme of turning her flapjacks by putting popcorn in the batter,” he concluded it “was a pretty good town for a shiftless man to move to.”

There were a half-dozen daily newspapers in St. Paul at the time and Hodgson wound up working for most of them, starting with the St. Paul Dispatch. His column for that paper was entitled “Cabbages and Kings.” His newspapering also included general reporting, sports reporting, covering the legislature, and writing editorials and book reviews.

Hodgson loved baseball, particularly the St. Paul Saints, and once got so incensed when the team blew a game that he tore up his press pass and swore he’d never return to Lexington Park. He quickly changed his mind, of course.

Golf, however, was a different story. In the early 1900s, it was the game of the privileged; there were no public courses in Minnesota. When it was proposed that the city remedy the situation by constructing one on some unused land in Como Park, west of today’s water park, the city council flatly rejected the idea, as did columnist Hodgson, champion of the common folk. In his column, he described the game as an “idiot’s delight,” pursued by “dudes, idlers and degenerates.”

It was his poetry, though, that set him apart in people’s minds. His topics were uplifting, patriotic, humorous, sentimental and possibly a little flowery for modern tastes.

There was “The Way the Little Children Go,” an ode to childhood dedicated to silent film actress Mary Pickford and her starring role in “Rebecca of Sunnybrook Farm.” And a poem for the Northwestern Druggist, a trade journal: “Your lips to mine love / Germ mixed with germ / Oh, what a thrill as / They wriggle and squirm.”

His tribute to the American flag written for Memorial Day 1918 (“… it is a living thing, pulsing with the throbbing ardors of humanity …” ) was printed in pamphlet form, with hundreds of thousands of copies distributed in the United States and abroad.

And one of his last poems was ribald, “The Lay of Nina Clifford,” occasioned by the demolition of the famous madam’s brothel in downtown St. Paul to make way for a new city morgue.

Hodgson left newspapering frequently for political staff positions and was secretary to St. Paul Mayor Vivian R. Irwin, becoming a candidate for the job when his boss did not run for re-election in 1918.

His opponents scoffed at a poet who aspired to political office, but his backers responded that, yes, Hodgson was “a poet by nature, but not of the scatterbrain sort.” In the end the distinction may have worked in his favor, because he won by a large margin.

Hodgson was a mainstream Democrat, a protégé of Richard T. O’Conner, known as “The Cardinal,” the powerful boss of city politics.

His star was clearly on the rise when Hodgson was re-elected handily in 1920 and that same year became the party’s nominee for governor. Unfortunately for him, there was political turmoil following World War I, including the perceived Socialistic threat represented by the Nonpartisan League out of North Dakota.

He “retired” in 1922 to devote himself to his poetry, but that didn’t last long and Hodgson ran successfully for the city council in 1924 and two more mayoral terms after that. He initially said he wasn’t going to run in 1930, but apparently changed his mind, subsequently losing in the primary.

Soon he was back at the Dispatch with a daily column “Larry Ho’s Corner.”

Hodgson and his wife, Elizabeth, had for many years lived at 1039 Van Slyke Ave., a block from Lake Como. After suffering a heart attack, he was confined to his home, dying there in 1937 at the age of 62.

His body lay in state in the lobby of the city hall/county courthouse.

In 1940, the city dedicated the ball field at Como Avenue and Midway Parkway in Como Park to Hodgson. A plaque near the picnic pavilions includes one of his poems, which serves as a fitting farewell to an eminently decent man:

“I’d like to live so humanly / That in some after year / A comrade happily may say / He left the roses here.”