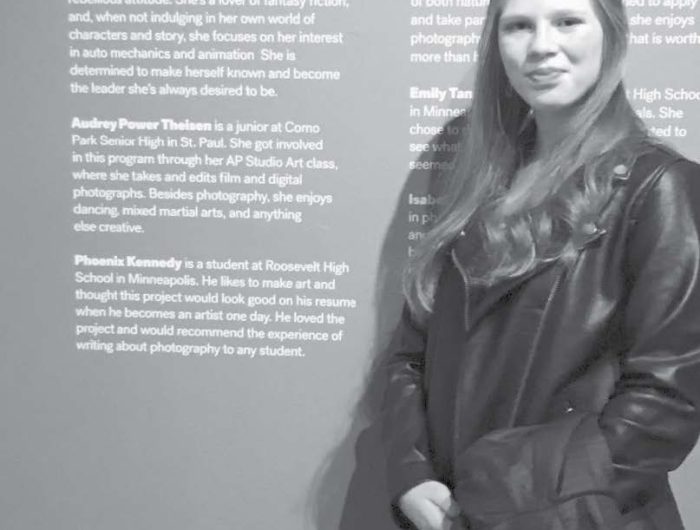 A new exhibit titled “Just Kids” at the Minneapolis Institute of Arts has the imprint of one student from Como Park Senior High School.

Junior Audrey Power-­Theisen was among the curators for the exhibit, working with museum staff to select and display the artwork for the display in the Institute’s Harrison Photography Gallery. The exhibition opened in early January and is scheduled to run through mid-June.

Como High art teacher Jason McIntyre nominated Audrey to help as an exhibit curator, calling her an exceptional art student who has flourished in her photography and studio art classes.

“Audrey is an amazing artist and this opportunity allows her to see the process that museums go through to choose and display art in a world class museum like the Minneapolis Institute of Art,” McIntyre said. “It is a very unique experience for a high school student.”

“Just Kids” explores the complex relationship between young people and photography, according to the MIA. “Comprised of nearly 200 objects, the exhibition includes images of children and teens by both celebrated and emerging photographers, as well as photographic books and series created for and by young people. Middle and high school students were integral to the curatorial process, writing and editing the gallery texts and weighing in on exhibition design.”

In other news at Como Park High School

• Thirteen Como students participated in the Youth in Government Model Assembly program from Jan. 9 to 13 at the state Capitol. The program gives high school students from across the state opportunities to serve as legislators, judges, attorneys, lobbyists, government officials and media representatives in the sessions that are conducted by the entirely student-led state government. Liz Paone, who teaches in Como’s social studies department and the Academy of Finance, organized the school’s participation.

• Forty-two cadets in the Marine Corps JROTC spent Dec.14 volunteering in the Toys for Tots holiday drive. The program was founded in 1947 by Marine Corps reservist Major Bill Hendricks. Como’s cadets have made service at Toys for Tots an annual event during the holiday season. This year’s project was organized and led by Junior Cadet Sergeant Eh Say Htoo.

• Prospective students for the 2020-2021 school year have been visiting Como throughout December and January, “shadowing” current students to see a day in the life of a Como student. If your student is interested in shadowing, contact Alexis Gray-Lawson who serves as a parent coordinator at alexis.gray@spps.org.