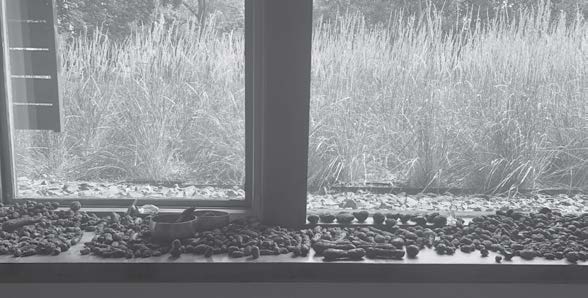 Last spring a group gathered weekly under the aspen trees on the front lawn of Karen Rue’s home in St. Anthony Park to sew 1,000 small leather pouches to hold some very special stones.

Each pocket holds a small lump of tektite, a rock formed under rare conditions when a meteorite strikes earth, melts surrounding sedimentary rock and scatters the debris. Rue hopes to spread peace by selling the pouches online and funneling profits to several peace activist groups.

‘‘What these stones do as you wear them is ground you into what your intention is,” Rue said. “It aligns you to your authentic self. And, how can we get to real peace if we can’t be at peace with yourself?”

A string of serendipitous connections led to what Rue is calling the Peace Pocket Project. Rue, who used to run a shop in Northfield called Circle of Stones, has long been interested in rocks. In 2017 she bought a heap of black tektite collected from Guangdong Province in China.

“They’re not a particularly pretty stone,” she said. “They’re like a clump of rough coal.”

But some people believe that what tektite lacks in beauty it makes up for in calming energy.

“It’s something that came from so long ago and from the stars,” said St. Paul musician and poet Thomas LeBlanc, an enrolled member of the Sisseton-Wahpeton Dakota who also goes by the name Strong Buffalo. The Vietnam veteran and peace activist is one of several people participating in the project.

Twin Cities costume designer Kathy Matalamaki showed them how to stitch pockets from traditionally tanned deer hide. Rue’s husband, sister and a former college roommate pitched in to help. A woman from northern Minnesota plucked apart old denim jeans and hand-twisted the blue threads into cords so the pouches can be worn around the neck.

The team has completed all 1,000 and distributed about 100 by word of mouth to people scattered across the United States and abroad. They’re listed at $59 and up at Rue’s website, esthercairn.com, though Rue also encourages people to simply pay what they can and has given some away. Her goal is to get them into them into the world and spreading peace.

Maja Beckstrom lives in St. Anthony Park and is a journalist and writer.