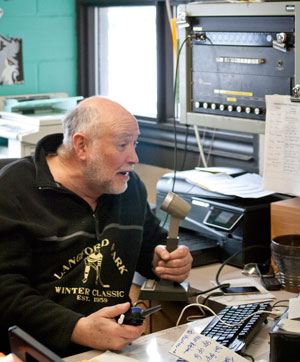 Bill Paist, one of the founding fathers of the Langford Park hockey program, drops the puck at the squirt championship game. Bugle photo by Lori Hamilton.

Rain and unseasonably warm weather on the opening days of the 54th annual Langford Park Winter Classic threatened to cancel the Squirt Classic hockey tourney at the annual event Jan. 10-13. But temps dropped by 3 a.m. on Saturday and by 8 a.m. the ice was ready for the tournament, which was played in its entirety on Saturday and Sunday.

“Mother Nature threw her best at us, and we still got it off over the weekend in two days,” said Mark Lundquist, who stepped in as acting director of the tournament after Scott Hamilton, who coordinates the Langford Hockey program, was called out of town.
Inside the rec building, 10U and 12U boys basketball teams battled it out, with Duluth & Case winning in the 12U division and Palace besting the 10U competition.

The Winter Classic also features a medallion hunt. Seventh-grader Ben Williams and 10th-grader Nick Brady found it near the horseshoe court at the park. They won a gift certificate to the Colossal Cafe and a bag of M&Ms.

Ice man Andy Frisell makes another sweep around a rink at the Langford Park Winter Classic. Frisell and his dedicated crew maintain the ice at Langford Park throughout the season for everybody to enjoy. Bugle photo by Lori Hamilton.

Some of the highlights to the weekend, according to Lundquist, include a visit from Bill Paist, one of the founding fathers of Langford Hockey, who dropped the puck in the championship game; a live performance of the National Anthem by squirt dad Taylor Burr; and a visit on both Saturday and Sunday from the St. Paul Police Department after a neighbor complained about the loud sound system. One more high point: “We also sold pickles for the first time,” he said.

Lundquist thanks the following people for stepping in: Laura Manning, who coordinated the food; Beth Commers, who scheduled volunteers; Charlie Rogers, who directed the barbecue fundraiser; Andy Frisell and Derek Fried for maintaining the ice; Mark Moormann for greeting the teams as they arrived; Rich Hahnen, announcer extraordinaire; Taylor Burr, who improved the P.A. system, which might be why it seemed louder; and David Ellis, a Squirt dad and professional photographer who took photos at every game and is selling them on the Langford Hockey website (langfordparkhockey.com) for a $10 donation. The money will go to the hockey program.