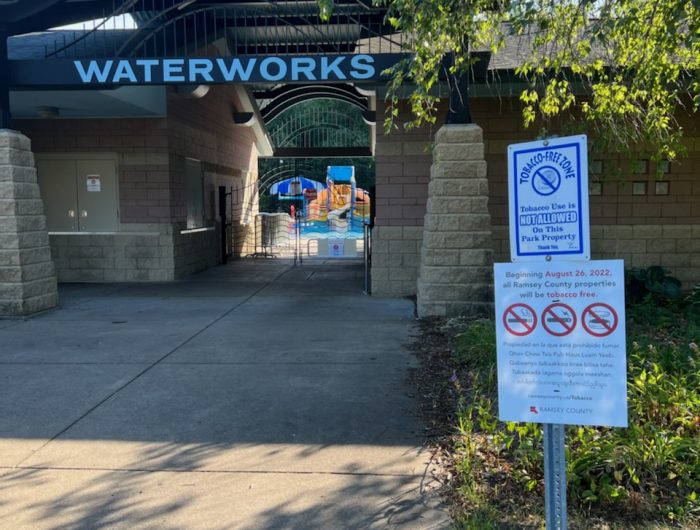 As of Aug. 26, a new county ordinance prohibits smoking, vaping and commercial tobacco product use on all Ramsey County properties.

And a nonprofit advocacy group in south St. Anthony Park played a key role in its creation.

Combined with the Minnesota Clean Indoor Air Act, the Ramsey County Smoking and Commercial Tobacco Use ordinance applies to tobacco use indoors and outdoors, including spaces like parks, recreation areas, trails, playgrounds, beaches and other properties owned or leased by Ramsey County.

The Association for Nonsmokers-Minnesota (known by the acronym ANSR) helped guide the county in developing the policy and engaging community members, said Emily Anderson, ANSR’s policy director. The group is located at 2395 W. University Ave.

More than a year ago, Ramsey County staff began seeking community input about general park usage, and one of the issues that emerged was tobacco use. The county then connected with ANSR for support in writing, implementing and promoting the tobacco-free policy.

ANSR has been working to reduce the effects of tobacco use in Minnesota since the 1970s and was originally founded to protect nonsmokers from secondhand smoke indoors. Since then, Anderson said, its work has expanded to include additional policy initiatives, education and community partnerships.

“Our main thing is fighting against the tobacco industry,” Anderson said. “We’re by no means anti-smoker. We’re really about fighting the industry and making sure that they are held accountable for their predatory marketing practices, which have targeted youth in the past and continue to do so.

In 2017, ANSR helped Minneapolis and St. Paul to restrict the sale of flavored tobacco, including menthol.

“We know that flavors are particularly attractive to youth, especially with vaping products,” Anderson explained, noting that such products come in flavors like cotton candy, bubblegum, chocolate and Sour Patch Kids. “We know that’s really a strategy by the tobacco industry to hook kids.”

“We also know the industry has a track record of targeting especially Black people with menthol cigarettes,” Anderson added, explaining that the industry has marketed menthol products to Black communities since the 1950s. “So, we’re really coming at these flavor restrictions from both a youth perspective, youth prevention, as well as a health equity and racial equity perspective.”

Another ordinance that took effect in St. Paul this year is the prohibition of tobacco coupons and price promotions, which ANSR believes is the first such policy in the nation.

The tobacco industry spends a large portion of its marketing budget on discounts, Anderson said, because “they know that people are price-conscious; they like a deal. And then they’re more likely to stay hooked.”

Meanwhile, regarding the new Ramsey County ordinance, a public hearing was held on June 28 that allowed residents to comment on the proposal. Supportive statements from community members focused primarily on health equity and the environmental impact of tobacco production and disposal practices, Anderson said.

The health implications of tobacco products are well known, but as ANSR works to engage younger people, it is focusing on environmentalism, an area in which Generation Z is particularly invested, Anderson said

Cigarette litter remains a major concern, she said, but vaping products have introduced new hazardous waste to the environment in the form of liquid nicotine, and they also increase the amount of plastic and electronic waste in communities.

Despite the successes of smoke-free advocates, Anderson said, tobacco use still remains a significant problem in America. The tobacco industry continues to invest heavily in products and marketing, and when the vaping epidemic took off, tobacco usage rose sharply starting in 2016 and 2017.

“So, they have a whole new crop of young people that they wouldn’t have otherwise had,” Anderson said. “On top of that, tobacco still costs the state of Minnesota about $3 billion every year in health care costs and lost productivity, so it’s still a problem.”