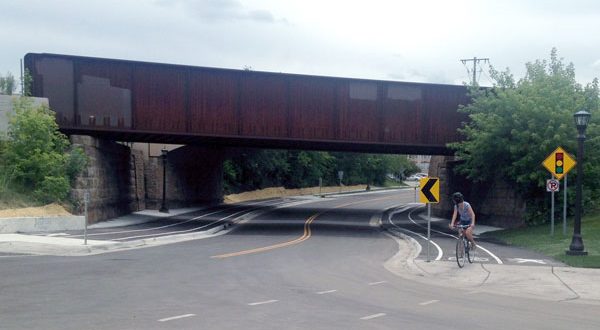 The new bike lanes under the railroad trestle are ready to ride. Photo by Bill Lindeke

For years, the Raymond Avenue railroad bridge has been a bicycling nightmare. The underpass is a rare link connecting the northern and southern parts of the St. Anthony Park neighborhood, and for bicyclists or pedestrians, getting over the busy barrier of the BNSF Railway tracks has required traversing the dank dark sidewalks, dripping with water and full of potholes.

But after a seemingly endless construction period, the new bike/walk connection is finally open—and the design is an innovative new hybrid bike trail and sidewalk that could suggest the future of bicycle planning in St. Paul.

In 2013, the St. Anthony Park Community Council held gatherings on Manvel Street in South St. Anthony and at Alden Park in north St. Anthony Park to talk about the redesign of that part of Raymond Avenue, according to Pat Thompson, who co-chairs the Transportation Committee for the community council. “We had photos, Post-it notes and food. And we got people talking to each other.”

The resulting design is finally in place. The new sidewalk connection is part of the third and final phase of the Raymond Avenue reconstruction, which began in 2013.

For bicyclists, the design is something new for St. Paul. Unlike most bike lanes, which are separated from the sidewalk by a curb, the Raymond underpass link includes a ramp that brings bicyclists up into the sidewalk underneath the bridge. The design ensures that cyclists are protected from the drivers who might not see people riding bicyclists in the low-light conditions under the bridge.

“The neighborhood spoke up, and a lot of credit goes to the Public Works engineers, who came back with plans that we liked,” Thompson said.