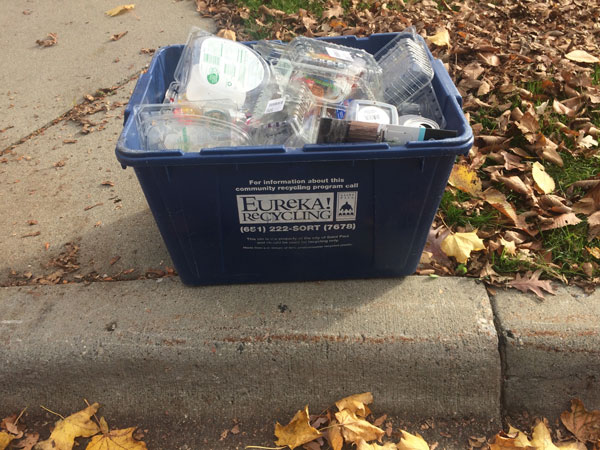 St. Paul is saying good buy to the blue bins.

That’s the “how” of the changes coming to the city’s recycling program, along with what, when and where.

Wheeled carts already are in use in Falcon Heights and Lauderdale. Starting Jan. 16, St. Paul homeowners and apartment dwellers will be able to recycle more types of materials, many will be doing it on a new day, and their recycling pickup may move from curbside to the alley.

“We anticipate that the changes we’re making will result in 35 percent more material being collected and 15 percent more participation in the program,” said Kris Hageman, environmental coordinator for the City of St. Paul.

In the Bugleland portion of St. Paul, the carts will be distributed from late November into January. Residents are to receive a “carts are coming” mailing and a brochure delivered with each cart will provide program details, Hageman said. The cost of the carts will be reflected in a small addition to the recycling fee on the annual property tax.

Households can keep their blue bins and put them to other uses. The city will also be designating drop-off sites to recycle the bins.

As for the new materials being accepted, these include paper towel and toilet paper rolls, cardboard food containers and refrigerated food boxes. For a comprehensive list of what will be accepted and what will not, go to stpaul.gov/recycle.

Pick-up day for the Como, Hamline-Midway and North End neighborhoods will move to Friday, while St. Anthony Park and most of Energy Park will recycle on Mondays.

And, if you have an alley and it’s accessible both to you and the recycling truck, that’s where your pickup will now take place. Large apartment buildings will continue recycling in the same location designated by their property managers.

Hageman said that the participation in the city recycling program varies widely and estimates that 75 percent of households participate at least once a month.

“Our recycling tonnage hasn’t grown for the past six or more years,” she said. “Some of this can be attributed to the fact that materials are lighter and much less newspaper is being collected than previously.

“But we hope the changes we’re making will convince more people to give recycling a try,” Hageman said.

Eureka Recycling got a boost this summer when the City of St. Paul, its original client, extended the firm’s contract through 2021.

“We have held the contract with St. Paul for 15 years, so we are excited to continue working with the city and residents to recycle as part of our zero waste mission,” said Lynn Hoffman.

Hoffman and Kate Davenport recently were named Eureka co-presidents, a collaborative leadership approach that the nonprofit has used since it started as a spin-off from St. Paul’s Neighborhood Energy Consortium in 2001.

After starting with St. Paul, Eureka gradually expanded its service area to other communities, which now include Lauderdale and Roseville. Falcon Heights uses Tennis Sanitation as its recycler.

In most cases, Eureka both collects and processes materials, although its new contract with the City of Minneapolis is for processing only.

Eureka’s headquarters and processing facility are in northeast Minneapolis. More than 95 percent of what arrives there is recycled into new materials.

“We have over 80 employees now and will be adding staff to handle the volume increase at our facility,” Hoffman said. “All of our employees are paid a living wage with benefits, which is very rare in this industry.”

Eureka will be replacing most of its trucks and all of those serving St. Paul will be new, Hoffman said, adding that the trucks will be equipped to automatically dump the new recycling carts.

“It’s going to be a lot easier on our drivers, who had to lift and physically dump the blue bins,” she noted.