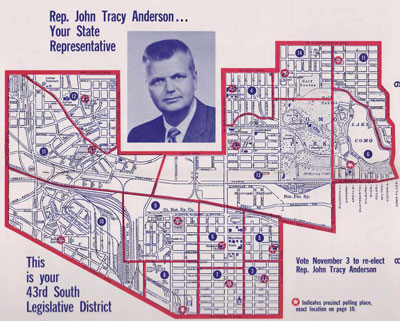 50 years ago, Bugle-area voters leaned Republican, but the partisan divide wasn’t quite as deep as it is today

No one who has witnessed the small forest of political lawn signs arising over the last few weeks would be surprised to learn St. Anthony Park, Como Park, Falcon Heights and Lauderdale are among the most reliably Democratic legislative areas in the state.

But was that always the case?

The 1950s and ’60s were a golden era for DFL politics in Minnesota—a time when the national influence of state Democrats far exceeded the state’s Electoral College strength. Hubert Humphrey, Walter Mondale and Gene McCarthy bestrode the national stage in those days, but they did so largely without the votes of Bugle-area residents.

“In those days, this was the most Republican precinct in the City of St. Paul,” says retired lawyer, Byron Olsen, of his neighborhood in north St. Anthony Park. And Olsen would know. As the unsuccessful DFL candidate for the Minnesota House in what was nationally the landslide Democratic year of 1964, he lost to the heavily favored incumbent, John Tracy Anderson, a Republican from Como Park.

“[Republican Barry] Goldwater got skunked in the presidential election that year,” he recalls with a laugh, “but so did I.”

The election records show that 1964 was no fluke. Going as far back as the 1940s, Republican candidates could count on reliable support from area voters. Sometimes the victory margins were far more than comfortable. Republican Elmer Andersen, for example, won roughly 80 percent of the vote from north St. Anthony Park when he ran for re-election as governor in 1960. Of course, it didn’t hurt that Andersen lived in the precinct. In those days before Minnesota acquired an official governor’s mansion, Andersen—and his neighbors—saw nothing amiss in him running the affairs of state from his home on Hoyt Avenue.

In many ways, Andersen typified the political philosophy of the area in those days. Glen Skovholt, who was long active in state Republican politics, remembers Andersen as “first and foremost” among his political heroes. “He embodied the progressive social philosophy,” says Skovholt. “He was a public-spirited citizen, not a machine person.” A successful businessman and in many respects a fiscal conservative, Andersen was also an unabashed progressive when it came to education and civil rights.

In those distant days, political alignments were more fluid, and it was still possible to talk about the liberal wing of the Republican Party. Retired banker Bill Sands of Falcon Heights points out that such bastions of progressive thought as the Minnesota State Department of Human Rights and the Metropolitan Council were both created in the 1960s during Republican administrations.

“Those people were progressive and committed to education,” he says. “Elmer Andersen was one of the most revered men in the state.”

Hubert Humphrey, who came to represent the national face of Minnesota politics, was no hero to the voters of this area. “There was not much of a positive feeling about Humphrey,” says Skovholt. “He was viewed as a radical … supported by labor.”

For many area voters in the decades after World War II, it was organized labor—“the unions”—that played the role of nemesis in their political drama. “The Democratic Party was controlled by organized labor,” asserts Skovholt. Adds Sands, “Democrats [who] were union members were pretty conservative [on social issues]. Unions weren’t open to people of color or women.”

Skovholt explained that before definitions of acceptable commuting distance expanded, St. Anthony Park and environs was dominated by faculty members from the nearby St. Paul campus of the University of Minnesota, as well as those affiliated with the neighborhood’s two Lutheran seminaries.

“It was a very agriculture-focused community,” he says. “The St. Paul campus was the farm school and almost all the professors lived in St. Anthony Park. The [University of Minnesota] campus had a tremendous influence. People came from farms and rural communities, which were [largely] Republican.”

What everyone remembers was the sense of common purpose and civic unity that reached across the political divide in the area. For those who have grown up in more politically polarized times, the memories of Skovholt, Sands and Olsen strike a note of barely believable comity.

“They were all good guys,” says Olsen of his opponents from those days.

“There was a lot more compromising then,” recalls Sands.

Notes Skovholt, “The partisan divide was reserved for Election Day.”

At other times, the community acted together through groups like the St. Anthony Park Association, originally founded as a men’s organization to work on expanding neighborhood educational and recreational opportunities.

Change came, of course. By the late ’60s, the nation was in political turmoil. Opposition to the Vietnam War joined with the struggle for minority and women’s rights, and in the ensuing culture wars, no neighborhood was left untouched.

Skovholt attributes the shift in voter loyalties to several factors. St. Anthony Park, he says, became more attractive as a residence to faculty members from the historically Democratic-leaning Minneapolis campus. At the same time, “Opposition to the Vietnam war was used by the DFL as a unifying factor.” Finally, with the adoption of the 26th Amendment in 1971, the voting age was lowered to 18. Suddenly, the large number of students who lived in the neighborhood was able to cast ballots, and their voting priorities had little in common with the feel-good era of Eisenhower politics.

Lois Anderson, widow of Sen. John Tracy Anderson, attributes her husband’s eventual defeat in 1972 to changing demographics. “For the first time, university students could vote,” she says. “It brought in more liberal [politics.]”

The man who defeated Anderson was a young Episcopal priest named Bob North. Four years earlier he had been the first Liberal Caucus candidate to win the Minnesota House District, which included St. Anthony Park in what was still officially a nonpartisan election. Now retired and living in Illinois, North recalls that his first intimation of victory came when he learned that he’d lost the north St. Anthony Park precincts—Elmer Andersen territory—by “only” 20 points.

Heavier DFL turnout in other parts of the district would carry him to victory over Rep. Jack Morris of St. Anthony Park, the last Republican ever to hold the seat.

“When I was initially asked to run I [said] that, as a priest or pastor, I had very little time to spend raising funds or going door to door campaigning, but that I did have time to go to two coffee parties on at least two nights each week to explain my positions,” North says. “They responded that the DFL in our district had a booth at the State Fair where they sold ‘those little doughnuts’ which would raise all the monies that the campaign needed.”

A few years later, attorney Neil Dietrich became the first area legislative candidate to formally adopt the DFL label during his 1972 campaign for the Minnesota House. By the mid-’70s the sea change in local politics was accomplished, and Democrats have dominated the voting here ever since.

By the dawn of the new century, the change appeared to be permanent. For Republicans, 2010 seemed to be a banner year everywhere but here. According to figures released by the Minnesota Secretary of State’s Office, that year DFL candidates carried every precinct in Falcon Heights, Lauderdale, Como Park and St. Anthony Park by 15 percent or more. In the 2008 presidential election, the results were even more striking. Democratic candidate Barack Obama carried the north St. Anthony Park precinct that the late Gov. Andersen once called home with 84 percent of the vote. Other nearby precincts in St. Paul and Falcon Heights racked up similar margins for the Democrats.

Numbers like those don’t faze Lois Anderson. She remains a stalwart Republican who “absolutely will vote for [Mitt] Romney.”

Others have their own explanations for the shift in political allegiances. “I’m not sure that [St. Anthony Park] has changed as much as the issues have changed,” says Sands. “Things have gotten really dogmatic. It’s very difficult for me to support the Republican candidates in Minnesota today because of the issues.”

As for Skovholt, the longtime Republican Party activist says wryly, “I’m looking for something I have in common with [GOP vice-presidential candidate] Paul Ryan. I feel as if my party left me.” Come Election Day, Skovholt is voting for Obama.

Judy Woodward is a reference librarian at the Roseville Library and a frequent contributor to the Park Bugle.

The artwork in this article are courtesy of Glen Skovholt. Shown are the cover of a 1962 brochure urging Minnesotans to “Go Republican All the Way,” and campaign literature for Republican Gov. Elmer Andersen and Rep. John Tracy Anderson, who was defeated in 1972 .