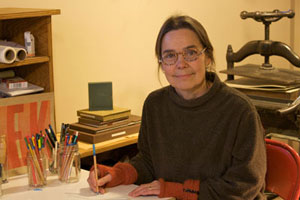 Regula Russelle can’t remember exactly when she took her first letterpress class, but one thing this year’s winner of the Minnesota Book Artist Award is sure of, bookmaking changed her life.

“It was either 1996 or 1997, and I was at Hamline [University in St. Paul] to get my M.A. in liberal studies,” says the longtime St. Anthony Park resident. “I was also taking bookmaking classes, which included papermaking, letterpress and bookbinding, at the Minnesota Center for Book Arts (MCBA). During that time, our granddaughter was born, and I wanted her to be a person in possession of a story from the start of her life, so I made her a book. My husband, Michael, wrote the text and I did the illustrations and created the physical book.”

Russelle’s speech is lightly peppered with purred R’s and her voice is mellifluous with lots of rises and falls. The accent is hard to pinpoint. “It’s Swiss-German,” she explains. “I was born in Zurich.”

For her final graduate school project, Russelle completed a handmade book. Soon she was lecturing to other classes about the bookmaking process as she continued studying at MCBA in downtown Minneapolis.

“The book arts community is quite inclusive and similar to the tradition of the old apprenticeship models,” she says. “When I was learning how to do it, I was at the Center [for Book Arts] five days a week, working with other people. I wouldn’t be where I am without the Center for Book Arts.”

Those who have never seen a handmade book are in for a visual and tactile treat. Too diverse to categorize, these books are various shapes, patterns, textures and colors, but the centerpiece may be the type that’s pressed into the paper, making the text part of the design, as well as the vehicle of the message.

Russelle established Cedar Fence Press in 1999, which publishes limited-edition books and prints. For her, bookmaking became both a passion and a calling. “I just fell for it and knew early on that I could do this for the rest of my life.” She spent a year learning all aspects of the art and soon grew proficient in it. “I just felt like I was in the right city, knew the right people, and was open to this direction,” she says. “At certain times in your life, you become like a magnet and things come together.”

She paces and gestures as she talks. Kinetic, yes, but not frenetic. “I feel sometimes that I’m slow-paced compared to most Americans—and bookmaking is very slow-paced. A professor friend said that people naturally gravitate toward the medium that goes at the right pace for their thinking and feeling, and I think this is true for me and bookmaking.”

Russelle came to the United States in the early 1970s. “Being from an older culture like Europe, you grow up surrounded by things that have been made slowly with great care and they communicate over centuries,” she says. One of Russelle’s earliest memories is of her grandmother. “My parents owned a grocery store and worked constantly, so in the summer, I stayed with my grandmother in the country. Her home was several hundred years old with no running water or indoor toilet. I would tend fields and harvest potatoes or beans alongside her, and it was a time of almost no language and it was fantastic. I think in part that made me who I am. I think I’m very internal.”

She later became a Quaker. “The silence and the religious experience coming out of silence make sense to me,” she says. “The printing work I do is also quite contemplative. Still, I love people and I love working with them.”

It’s clear, as she rattles off a litany of names, how well-connected Russelle is.

“Do you know him?” or “How about that person?” she asks. From the St. Anthony Park neighborhood to peace groups to a poetry collective and to Hamline, MCBA and Augsburg College (where she teaches papermaking and book arts), Russelle traverses a diverse range of social circles.

“In my teaching, I show how to make beautiful books with very simple tools that cost under $100,” she says. “These books can even be made on a kitchen table or desk. I always tell students that if you do this right, you will carry your book out of a burning house.”

When describing her work, she says, “My work has two strands in it: I’m interested in what people do together and what happens in many different kind of communities. I’m also interested in spiritual questions: Why do we do what we do?” Those strands are represented in the books she collects and makes. “The books I make are very low editions. Sometimes I’ll make one, sometimes 100. The impact of the work is smaller because there are fewer copies, but they’re going out into the world.”

Russelle’s first solo exhibit runs from Jan. 21 to March 6 in the second-floor Cowles Literary Commons of the Open Book building, 1011 Washington Ave. S., Minneapolis. This exhibit is in conjunction with the 2011 Book Artist Award, which is coordinated by the Friends of the St. Paul Public Library, sponsored by the Lerner Publishing Group and presented by the MCBA and the Minnesota Book Awards.

“I feel like I won the lottery, actually! I’m doing what I love to do and I am privileged to share it,” Russelle says. “That is as much as any human being can ask of their work.”

Natalie Zett is an award-winning writer and frequent contributor to the Park Bugle.

A reception showcasing the work of Minnesota Book Artist Award recipient Regula Russelle will take place Friday, Feb. 4, from 5:30 to 7:30 p.m. at Open Book, 1011 Washington Ave. S., Minneapolis. There will be a brief program and presentation at 6:30 p.m. The reception is free and open to the public and will feature live music, hors d’oeuvres and wine. Exhibits of Russelle’s work will also be featured at other venues throughout the state this year, including St. Paul’s Central Library from late March through April.

For more information, go to www.mnbookarts.org/artistsprograms/bookartistaward.html.