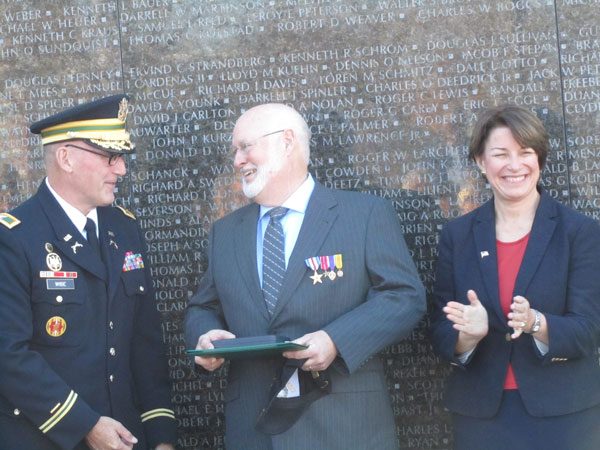 Forty-seven years after Ken Hughes was hoisted out of a Vietnamese jungle by helicopter with bullet wounds in his left arm, right shoulder and chest, the former Army combat medic has been awarded for his valor during an intense firefight on March 3, 1969.

Hughes—now a family practice physician at HealthPartners and a resident of St. Anthony Park—was given the Silver Star on Nov. 10 at the Vietnam War Memorial in St. Paul. Sen. Amy Klobuchar, D- Minn., presented the medal, the third-highest Army combat decoration.

“Every year, right after Election Day, we gather to honor veterans,” Klobuchar said. “Today we focus on what unites us: deep love of our nation. Patriotism is why so many veterans have risked their lives on the battlefield. Kenneth Hughes is a true patriot.”

Hughes and his unit were overrun by the Viet Cong on a mountainside in the Plei Trap Valley near the borders of Cambodia and Laos that March of 1969. Hughes ran into the firefight to attend to the wounded. He was shot in the left arm before he’d finished tying a bandage on one soldier. A friend tried to help Hughes tie a bandage on his own arm, but before they could cover the wound, both were hit with a volley of AK-47 fire. Hughes’ friend was shot in the lower body, and Hughes took another bullet, this time to the right shoulder. The bullet made its way into his chest.

“I knew my effectiveness as a field medic was finished,” Hughes wrote in a memoir about the incident. When the commanding lieutenant ordered the troops to pull back, Hughes stayed with his friend and tried to bandage him, “but my arms wouldn’t work. Then I tried to get him to use his arms to hang onto my belt so I could pull him out.”

When Hughes heard U.S. gunships nearby, he knew that was the only chance to get out of there. “I tried again to get him to hold onto my belt, but he wouldn’t, or couldn’t.”

Hughes eventually made it alone to what remained of his company. There, he was attended to by the only remaining medic. “Since I was technically still his boss, he asked for advice, both about me and several other wounded,” Hughes said. Despite the intense pain, Hughes refused morphine so he could give advice on how to handle some of the other soldiers’ injuries.

Hughes and two other seriously injured men were rescued that night when a helicopter dropped a cable and basket through the jungle canopy.

Hughes, who grew up in Excelsior, Minn., was 20 years old and a “very reluctant soldier” when he was drafted into the U.S. Army in April 1968 during the height of the Vietnam War. “I had serious ethical qualms about being a solider,” he said. A self-described pacifist, he applied for conscientious objector (CO) status while in basic training.

“I wasn’t really very religious, but I had promised myself as a young child that I would never again shoot a living creature because of how devastated I felt when I used a bow and arrow to shoot a baby robin,” he said. He was dubbed “Nature Boy” by friends and family because he was the kind of kid who wanted to rescue baby squirrels, feed birds and spend time outdoors.

On his last day of basic training in 1968, Hughes’ company commander told him that he had orders for medic training and wouldn’t need CO status because medics are not required to carry weapons. He hadn’t yet thought about a career in the medical field, but he was happy to ship out to Fort Sam Houston in San Antonio, Tex., for his combat-medic training. A few months later, he landed in Vietnam and joined his company in the Central Highlands south of Pleiku, “a noncombat medic in a company of infantrymen.”

“No one in the company that I know of thought it bad of me not to have a weapon,” he said. “They were just glad I was there to put bandages on them.”

When Hughes woke up in the Pleiku hospital the day after being lifted from the jungle firefight, he learned that nearly half of the 100 men in his company were killed in the fight. He spent two weeks in Pleiku, was then flown to Camron Bay for extensive surgery, was then taken to Camp Zama, Japan, for more care, and then to a hospital in San Francisco, where he had one more surgery. After he recovered, he was assigned briefly to a unit at Fort Lewis near Tacoma, Wash., until he was medically discharged.

Hughes eventually used the G.I. Bill to attend college and went on to receive a medical degree from Oregon Health and Science University School of Medicine. After a residency, he moved back to Minnesota to practice.

The inauguration “was near the Vietnam [Memorial] Wall,” Hughes said. He went online and found a virtual wall and looked for the names of the men who were killed in the Plei Trap Valley incident.

The connections he made by going over the names of the deceased led him to Buddy Williams, or retired Lt. Col. Felix Williams, the only officer to survive the operation. When the two men met up, Williams asked Hughes if he was ever recognized for his heroism in the 1969 battle. Hughes told Williams he received the Purple Heart while in the hospital. “That really stinks,” Williams said. It wasn’t enough.

It was Williams and Hughes’ cousin John Gritz, a retired colonel from the Special Forces, who contacted Klobuchar’s office last January to initiate the Silver Star decoration.

“When anybody named Buddy calls my office, it goes right through,” Klobuchar joked at the award ceremony. In September, Klobuchar’s office received confirmation that the Silver Star had been approved.

Williams and Gritz attended the ceremony, along with two other soldiers who were part of Hughes’ company—Company A, 3rd Battalion, 8th Infantry, 4th Infantry Division—in 1969, Paul Mims and Sam Jones.

Williams is “the fellow who kept my company together that night,”

Hughes said. “Sam Jones—Sgt. Sam Jones—stood in the middle of the night with his back to the enemy to tie me onto the cable.” Jones was missing in action for days after the operation. Mims rotated out of the field the day before the action, Hughes said. It was 43 years before Hughes met up with the three men again.

As Hughes accepted his Silver Star on a sunny, unusually warm November afternoon, he looked around the crowd, which included an Army color guard and dignitaries from the Minnesota Army Reserve and Minnesota Dept. of Veterans Affairs, and said, “We are surrounded by heroes.”