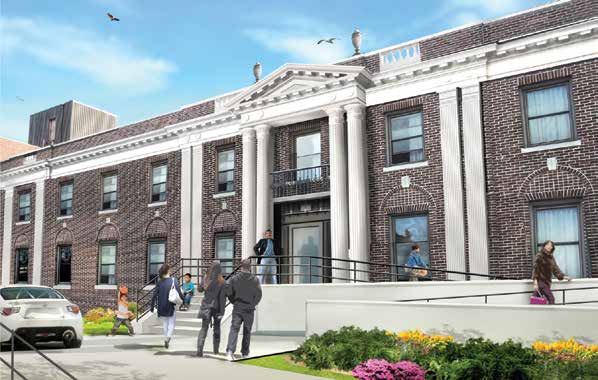 But plan comes with parking challenge

But the project will require a substantial parking variance in order to work, a representative of Midway Community Group Redevelopment told District 10’s Land Use Committee in October. The company, headed by Minneapolis developer Jeffrey Laux, is buying the former nursing home property at 1554 Midway Parkway through foreclosure.

“It comes down to parking,” Chuck Repke said. “This can work, but it comes with a dilemma.”

(Editor’s note: The former senior care center site has been vacant since 2008 when Sholom Home moved its operations from the complex to a new site. A subsequent owner failed in its efforts to turn the facility into an assisted-living housing complex. For more background, check out the Bugle story from February 2018: https://www.parkbugle.org/
public-meeting-on-sholom-home-future-to-be-held-march-7/)

The existing site currently has 65 parking spots on its Canfield side. Plans include adding 10 more surface spaces and 25 more indoor spaces. But that could be more than 75 short of what city zoning requires.

Neighbors expressed concerns about increased traffic on Canfield, Arona, Midway Parkway, and Almond, especially during the State Fair. However, Repke said the parking crunch may not be as severe as neighbors fear.

The A-Line bus that stops at Snelling Avenue and Midway Parkway, plus other nearby routes, makes the building one of the most transit-friendly options available, Repke said. Owners believe it can be marketed successfully to renters who choose not to have a car. That target includes empty-nesters, young professionals, and graduate students at Hamline University and the University of Minnesota.