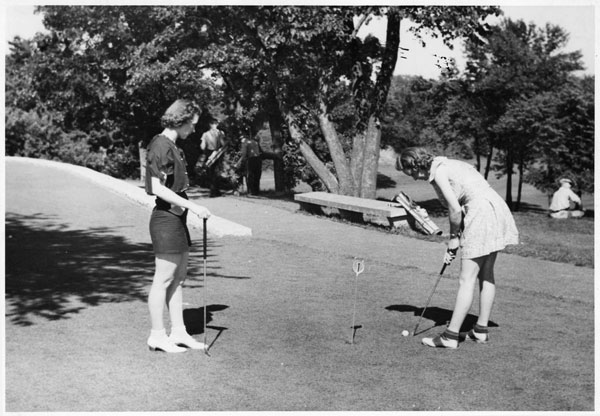 Residents pitched in to get public golf course at Como

Practice putting at Como in about 1940. Photos courtesy of Minnesota Historical Society

In the early 20th century, being a golfer around here meant belonging to a country club. There were no municipal courses in St. Paul, or anywhere in Minnesota, for that matter.

But the general public’s growing interest in the game eventually led to the opening of courses at Phalen Park, Highland Park and finally, Como Park, the latter cobbled-together from a developer’s unwanted land and two dried-up lake beds.

Said Louis Nash, St. Paul’s commissioner of parks and playgrounds, in 1915, “The game of golf today is confined to the rich for the only reason that it requires numberless acres to permit the game to be played; hence we have only private golf links in the neighborhood of our city. Steps should be taken to lay out public links at Como and Phalen parks, if possible, so that those of our citizens who cannot afford the luxury of exclusive club membership, should at least enjoy the privilege of playing the game.”

Phalen got its links in 1917, Highland in 1928 and Como in 1930. (The University of Minnesota purchased the nine-hole Minnepau Golf Course at Cleveland and Larpenteur avenues in 1926 and that evolved into today’s Les Bolstad Golf Course.)

There were several driving ranges and at least one miniature golf course operating around the Snelling and Larpenteur avenue intersection during the 1920s and 1930s. The Cross Roads range was on the northwest corner and the few nearby residents complained of the lights at night.

There had been talk of a course in Como Park going back to 1905, the favored location at the time being west of the city workhouse (the site of the water park today), in the general vicinity of what is now the Como Woodland Outdoor Classroom.

While interest remained strong over the years, little progress was made until the 1920s, when city officials gave up trying to keep water in Cozy Lake and the northwest arm of Lake Como. (Cozy Lake was in the valley north of the park’s Japanese Garden, where holes No. 5 through 9 are today, while the portion of Lake Como in question was on the west side of Lexington Parkway, the current site of holes No. 15 through 18.)

The city made a commitment to a course in its 1928 budget, and construction began in the former Cozy Lake area. Paul Coates, Ramsey County surveyor and designer of Keller Golf Course, laid out the first nine holes.

But more land was needed for a full 18 holes and supporters began eyeing a 30-acre tract on the south side of Hoyt Avenue and west of N. Dunlap Street, owned by developer Thomas Frankson. Frankson opened the adjacent Chelsea Heights residential addition in 1916, but to that point had found no use for the hilly tract known as Robertson’s Hole.

To raise money to buy the parcel, about a dozen civic-improvement clubs banded together in the summer of 1929 to stage a carnival in Como Park. Many of the clubs were located in the immediate area, but the level of support from the wider community was apparent as the North St. Anthony Park Club, the University Avenue Commercial Club and the Newell Park Improvement Association participated as well.

The fundraising came up short, so prominent businessmen with names like Bigelow, Griggs, Bremer, Hill, Seeger and Hamm kicked in more money and Frankson agreed to accept less than the appraised value for the property.

On May 3, 1930, a dedication ceremony for the course was held next to the first tee at a new flagpole that included the names of the founders inscribed on a bronze tablet in its base. (The tablet currently can be seen in a display case in the Como clubhouse entryway.)

At midsummer of that year, more than 100 volunteers wielding hoes and shovels helped put the finishing touches on the course prior to its opening.

Clyde R. May, commissioner of parks, playgrounds and public buildings, declared the greens to be in good shape, “for new greens.”

“The fairways are playable,” he added, “but have been suffering, like all fairways, from the drouth [sic].”

About 50 golfers were on hand for the start of play on Saturday, Aug. 16, 1930. The greens fee was 25 cents. (Many others presumably were in attendance at Keller, where the “St. Paul $10,000 Open,” was under way, featuring stars such as Walter Hagen and Gene Sarazen.)

The Como Golf Course has always had its quirks. For example, peat fires continued to burn underground in the former Cozy lakebed for several years. The fire department had to be summoned from time to time, and steam rose from the ground in winter.

And a golfer occasionally was said to get a “hot foot,” from breaking through the surface.