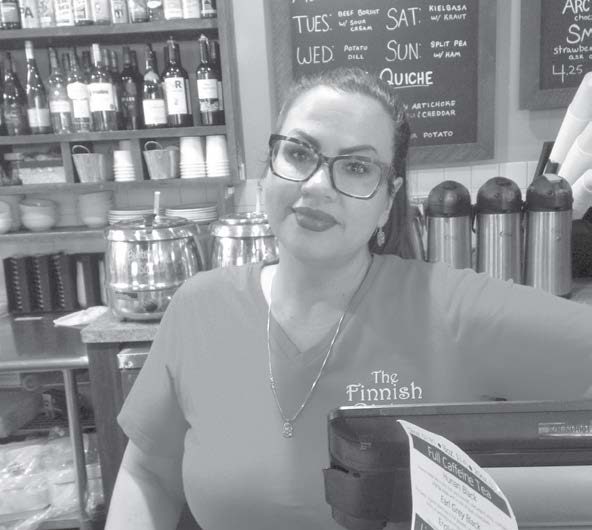 Restaurants, retail hope to rebound with easing of COVID-19 restrictions

With the easing of COVID-related restrictions for bars and restaurants on Jan. 6, Weise, the owner of the Finnish Bistro on Como Avenue, spent the next days preparing for the partial reopening of indoor service.

Minnesota Gov. Tim Walz’s recent mandate called for, among other things, no more than 50 percent occupancy indoors up to a maximum of 150 people, no larger than a party of two at a bar and a 10 p.m. closing deadline.

The partial reopening Jan. 11 came after a 54-day, stiffer shutdown that only allowed food establishments to offer takeout or delivery services.

“I am better off than so many of my industry friends, and I am very grateful,” Weise said. “We are fortunate that we’ve maintained steady business.”

Not every restaurant planned on reopening, to the extent allowed.

Dino’s Gyros in Falcon Heights would continue only handling takeout for now, CEO Jason Adamidis said in mid-January. The company owns four, Twin Cities area restaurants plus smaller operations at 10 corporate sites, which have been closed during the pandemic because large numbers of people have been working from home.

“Our stores are so small, there’s no way to do 50 percent,” said Adamidis, whose father started Dino’s more than 30 years ago. “Our break-even numbers are based on people coming in.”

A plan to open a walk-up ordering and pickup window was rejected by the Falcon Heights Planning Commission in late 2020, a move that frustrates Adamidis.

“The goalposts have moved constantly—rules and regulations, cities telling restaurants how to protect employees, telling us how to treat customers,” he said. “We thought we had a simple solution: a pickup window.

“January to March is the worst time for the whole industry. People make New Year’s resolutions to lose weight. They save money for spring break vacations, blizzards—that all hinders businesses.”

For the Finnish Bistro’s Weise, predicting how much business would pick up was a challenge. Staffing dropped from 22 to eight, including six dishwashers per shift, since the pandemic started. Because of that, she decided to serve everything in biodegradable, to go packaging and offer the full menu as best as she could.

“We can’t afford waste—or running out and having grumpy customers,” said Weise, who estimated the Finnish Bistro could serve about 34 people indoors at 50 percent occupancy and socially distanced. She planned to do on-site reservations on a first-come- first-serve basis.

The restaurant business is particularly vulnerable in times like these, Weise said. “I’m grateful for frontline people. But we are suffering in our own ways. When a restaurant closes, you hear, ‘It’s just a restaurant,’ but it’s more than that. I would lose everything. It ruins people’s lives.”

“I lost a half-million dollars last year, but I still am on the side of safety,” she said.

Despite the challenges of the past year, including a burglary at the restaurant just before Christmas, Weise is optimistic about the future.

“We feel stronger and more prepared, and it feels less uncertain,” she said. “Even if we had to open and close again, it’s not survival of the fittest, but of the most adaptable. And we can ride it out.”

One retailer was hoping bars and restaurants weren’t going to be the only businesses affected by the Jan. 6 mandate change. boreal Gifts & Goods, which opened in May 2019 in the former Bibelot storefront on Como Avenue, hadn’t been open even a year when the COVID-19 shutdowns began in 2020.

“We were closed March to May,” said Janet Haugan, the shop’s co-owner with Peggy Merrill. “At that time, we developed a website and worked hard to do whatever customers needed: home delivery, curbside, help shopping over the phone, some Face Time.”

She was hopeful the reopening of restaurant dining rooms, along with the increased distribution of vaccines, would get more people out of the house and gradually restore shopping to pre-COVID levels.

“It’s going to be a long haul,” she said. “People are very, very cautious.”

Cigale Ahlquist is a Twin Cities freelance contributor to the Bugle.