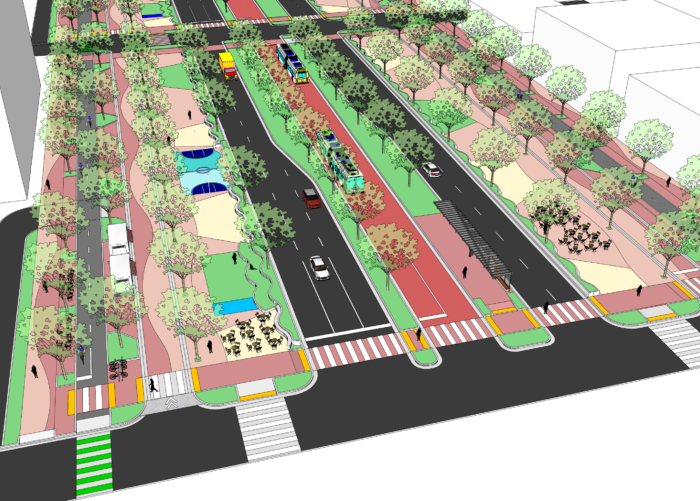 Rethinking I-94 into a human-scale boulevard

When it comes to the climate crisis, we can spend our days mired in awful versions of what is.

So, it’s startling when someone shows us a picture and asks, “What if?”

That’s the question asked in the Twin Cities Boulevard vision—a response to the Minnesota Department of Transportation’s “Rethinking I-94” process. This plan can be found at talk.dot.state.mn.us/rethinking-i94

• What if there wasn’t a 7-mile swath of sunken freeway between St. Paul and Minneapolis?

• What if it was a grade-level boulevard from Marion Street to Hiawatha Avenue, with dedicated bus rapid transit lanes, sidewalks and bikeways, knitting neighborhoods back together?

• What if the reclaimed land was held in a land trust, so the 60-year harms done to neighboring communities like Rondo could be redressed?

• What if the people who live nearby could cross the former trench the way they can other areas of the city, instead of treating it like an ugly river (or a car sewer, as some call it)?

• What if we started shaping our future bravely, guided by actual realities predicted by climate scientists, instead of bowing to a present political “reality”?

• What if we acted as if, in a climate crisis, spending money to rebuild a freeway that would last 50 years was irresponsible?

We all need help imagining something different from the status quo. That’s what the Twin Cities Boulevard and its website help us do.

Is a boulevard conversion possible?

Several other cities have already removed all or parts of their freeway segments, and plans are approved in others. Famous examples are the Embarcadero along the San Francisco waterfront, now a boulevard, and the Cheonggye Expressway in Seoul, which daylighted a creek and created a linear park.

In both cases, general traffic in the areas decreased greatly, because traffic is not a natural phenomenon like water. It’s induced by the infrastructure that’s built for it.

Michigan’s Department of Transportation announced in March that I-375 will be removed in Detroit. A section of I-81 will be removed in Syracuse, New York. The Inner Loop of I-470 in Rochester, New York and the Park East Freeway in Milwaukee have been scrapped. And people in Duluth are advocating removing the north-most part of I-35, which separates their downtown from the waterfront.

Transportation emissions are a big driver of climate change, enabled by highways. But noise and air pollution have health hazards, too, especially for neighborhoods nearest those roadways.

A local example: In I-94-adjacent south St. Anthony Park, asthma hospitalization rates are twice that of Ramsey County as a whole … and its Minnesota Pollution Control Agency pollution score is among the 10% worst in the state for fine inhalable particles.

The health effects of noise pollution are less well-documented but should not be discounted. Recent research has found that people living in high traffic areas for more than a decade had a greater risk of dementia in general and a 27% increase in risk for Alzheimer’s disease, even when controlling for other factors.

Supporting the boulevard as an option

Transition Town – All St. Anthony Park has signed onto a letter to MnDOT, the federal government, and local elected officials supporting inclusion of the Twin Cities Boulevard vision as one of the options that MnDOT should explore in its Rethinking I-94 process, joining organizations like Our Streets Minneapolis, MN350, Move Minnesota, and Health Professionals for a Healthy Climate.

At its March 29 meeting, the District 12 Transportation Committee heard a presentation on the Boulevard vision and then passed a motion encouraging the full council to also sign onto that letter. The vote recognized that the Boulevard vision is in keeping with SAPCC’s 10-year plan and its goals addressing the climate crisis, and that St. Paul itself has declared a climate emergency.

The District 12 Land Use Committee will hear a presentation on the Boulevard and consider the motion at its next meeting. Final passage requires action by the District 12 board at its May 12 meeting.

Visit TwinCitiesBoulevard.org to find photos of other freeway-to-boulevard conversions, an info-rich FAQ and an easy way to let MnDOT and elected officials know you support the vision through a petition or email portal.

Pat Thompson is a member of Transition Town – All St. Anthony Park who spends her time thinking about and working on transportation, gardening and community ownership.

Pat Thompson
Pat Thompson is a member of Transition Town – All St. Anthony Park who spends her time thinking about and working on transportation, gardening, and community-ownership. With Mindy Keskinen, she coordinates the Park Bugle's column from TT-ASAP, featuring a variety of local voices on climate and resiliency topics. Working toward a "smaller footprint, stronger community" since 2013, the group finds neighborhood-based ways to take action on climate change: learn more at TransitionASAP.org and drop in on a monthly meeting. Open to all, the group is part of a larger movement of municipalities transitioning from fossil-fuel-based ways of life to more eco-friendly, equitable practices. To browse their past columns by topic, visit TransitionASAP.org/park-bugle-columns. They welcome your ideas: reach Pat at transportation@transitionasap.org or Mindy at communications@transitionasap.org.