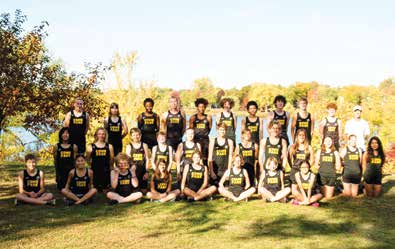 Despite all the challenges of distance learning during a pandemic, several fall sports were able to start in mid-August and successfully conclude their seasons in mid-October.

While new protocols were put in place to ensure safety, and limits put on the frequency and number of competitions, student athletes enjoyed the chance to play the sports they love and make memories with their teams.

Here’s a glimpse of highlights and accomplishments from the Como Park Athletic Department:

Both the boys and girls teams finished in third place out of the seven schools in the St. Paul City Conference. Thirty-five runners in the program provided good depth and critical mass for a supportive running community.

Senior Justine Wulff was the top runner for the Cougars on the girls side and repeated the accomplishment of being an all-­conference performer.

On the boys side, sophomore Charlie Power-Theisen consistently placed at the top of conference meets and clinched the individual city title with a 5K time of 16:49. Senior Shukur Bati was also an all-conference runner, placing fourth in the final city meet. Senior Kalid Ali and sophomore Mason Aarness both obtained all-conference honorable mention.

At the Section 4AA Meet, Power-­Theisen and Bati posted times that qualified for state. While the State High School League didn’t sponsor any fall state tournaments, the Twin Cities Running Company held a showcase event for state qualifiers. Both Como boys displayed grit in their race against elite competition.

After graduating several talented seniors from the 2019 conference championship team, this year’s Como squad took on the challenge of competing for another title.

With a stellar defense anchored by senior goalkeeper Anna Weins, the Cougars had a 0.9 goals against average, only conceding 11 goals in 12 games. Their 6-4-2 overall record included a third-place finish in the conference regular season and third place in the city tournament.

Those results included one-goal losses to rivals Central and Highland who took the top two spots, plus an overtime shoot-out loss to St. Croix Prep in the Section 4AA Tournament.

Resilience was a trademark of the team. They overcame injuries by having young players step in to important roles and never stayed down after hard-fought games that didn’t go their way.

In the extremely competitive world of St. Paul City boys soccer, the Cougars held their own while playing many intense matches on the way to an overall record of 6-6-1.

After going 3-3 and finishing fourth in the conference regular season, Como advanced to the semifinals of the city tournament against top seed Central. The tournament’s unique format featured two games against the same team, spaced one week apart, with an aggregate score determining the winner.

Como tied Central in the second leg (match) but fell 7-5 in the aggregate scoring. That placed the Cougars in the series for the third-place prize, and Como prevailed by outscoring Washington 4-3 in aggregate.

One week later, Como and Washington wound up facing each other again in the Section 4A Tournament, where Como was eliminated in a penalty kick shoot-out.

There was joy on the tennis courts this fall with more participants, improved play and a couple of conference wins for the Cougars. Senior Rachel Levin and junior Eva Larson were all-conference. Senior Sandy Roldan Canonga, sophomore Anise Bates and freshman Ashley Hartwich received honorable mention.

Football and volleyball started their seasons at the end of September and were still competing as the Bugle went to press.

Cougar volleyball began their season by going 6-4 in conference play. And as for Como football, a 4-0 start put the Cougars in position to possibly claim their first conference championship since 2009.