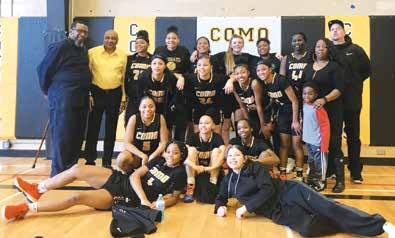 The spring of 2020 will never be forgotten in sports conversation. Beyond the shutdown of professional and collegiate athletic events, high school athletes will always remember their canceled seasons.

We offer these highlights to help you recall achievements of Cougar student athletes during the past school year. 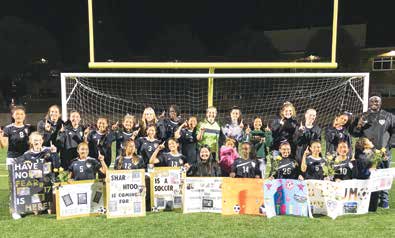 The Cougars had a historic season winning the St. Paul City Conference championship for the first time since 2005. In the playoffs, Como advanced to the Section 4A semifinals and finished the year with an overall record of 12-4-1.

The key moment of the season occurred on the Cougars’ home turf versus the defending city champs from Central. After falling behind 1-0 early in the first half, Como rallied with two first-half goals of its own and played with poise and control in the second half to notch the critical victory.

Como volleyball had a resurgence in 2019 with the varsity improving its record by eight games, finishing 13-8 for the season. The Cougars’ 8-4 conference record was good for a third-place finish.

Season highlights included a thrilling five-set victory over Central in front of an energetic home crowd, and an eight-match winning streak during the second half of the season. Senior setter Anisa Smith and junior outside hitter Hannah Hausman were recognized as all-conference. Senior middle hitter Carter Brown received honorable mention.

The long, cold winter sports season had plenty of hot nights in the Como High gym as the energy from the Cougar girls basketball team came steaming off the floor. Fans were thrilled by the spirited play of five starting sophomores and a combination of senior leadership and even more youth coming off the bench.

The Cougars’ dominance of the City conference continued as their St. Paul City winning streak dating back to 2015 reached 62 straight games. In the process, the Cougars secured a sixth straight conference crown. With a hard-fought victory over Minneapolis South in the traditional Twin Cities Championship game, Como also attained its sixth straight Twin City Title.

As the No. 3 seed, Como cruised in the quarterfinals before it faced No. 2 seed St. Croix Lutheran in the semifinals. A gritty 62-58 Cougar win set up a Section 4AAA championship game in early March against No. 1 seed Simley. The Spartans were older, bigger and stronger with four starting seniors and earned the win.

The runner-up medals didn’t fulfill the Cougars’ dreams. But their runner-up sectional finish may very well serve as the inspiration and motivation for individual summer workouts in order to reach the next level in 2021.

The Cougar wrestling squad entered the 2019-2020 winter season as the defending city champions. While the matches among St. Paul foes were closely contested as usual, the results tipped the other way in team competition with losses at the margins leaving the Cougars tied for fourth place.

However, wrestling is a unique sport where individual competition exists alongside the team format. Section tournaments for wrestling include brackets by individual weight class, with the top two finishers qualifying for the state meet at the Xcel Energy Center.

Students, coaches, parents and the entire high school sports community are hopeful the 2020 fall sports season commences with practices on Aug. 17, as scheduled, and COVID-19 is under control. Only time will tell.