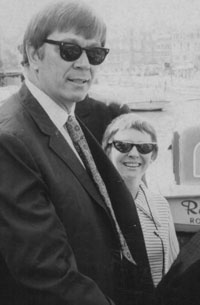 Hey was born in Okeene, Okla., in 1919. After reading every book in his high school library, he moved to Washington, D.C., to work for the U.S. Department of Agriculture. While working there, he enrolled at George Washington University.

Hey was drafted into service in 1941 and was stationed at an air base in Childress, Tex., where he corresponded with Miriam Jennings, who he had met in Washington, D.C. They fell in love through their correspondence and married in Childress.

After the war ended, Miriam and Hey moved to Kentucky, where they both could attend Berea College, the only college they found that allowed married students to live together. They scheduled their classes so that one of them could care for their first child as the other attended class. “One would head home and they’d pass off the baby,” according to their daughter, Janet.

The family moved to Newton, Mass., where Hey attended Andover Newton Theological Seminary. He earned a bachelor of divinity degree and was ordained in the American Baptist Church.

Later, he enrolled at Columbia University in New York City and earned a Ph.D. in sociology. He joined the Marriage Council of Philadelphia, a program at the Pennsylvania School of Medicine and worked with Dr. Emily Mudd, a pioneer in the field of marriage and the family. They were some of the first to work with couples in family therapy rather than with spouses individually.

Eventually, Hey moved his family to Minnesota to join Gerry Neubeck at the University of Minnesota, where they established the first post-doctoral program to train marriage counselors. He later led the Department of Family Social Science and served as president of both the National Council on Family Relations and the American Association of Marriage and Family Therapy.

After retiring, Richard took groups of students on trips around the world to study family systems and home economics cross-culturally. While living in St. Anthony Park, he was a regular participant in the exercise program sponsored by SAPAS.

He will be remembered as a lover of art and music, a great mentor and friend, a forward-thinking person who was a “work in progress up the day he died” and a generous kind man.

Hey inspired his children to take what you have and “make it work for you” and to make a contribution.

The real sorrow in his life was losing Miriam in May 2013.

A memorial service was held at Luther Seminary on May 30.