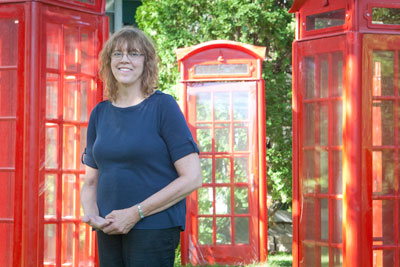 Quentin Nguyen is not a professional landscape designer, he says.

He’s “just an amateur guy” who wants to make his lawn on the corner of Lexington and Hoyt avenues in Como Park look nice and give his neighbors and the commuters who drive past that corner lot a reason to smile.

It helps to have a 6-foot-tall moss-covered giraffe named Gabriel at the corner of his house to greet the daily passersby, along with a few Dr. Seuss-ish looking topiaries lining the front lawn. And then there’s the hanging herb and vegetable garden: 108 2-liter green 7-Up bottles with yellow or red caps hang horizontally on his backyard fence along Lexington, each filled with a growing edible plant. No, he did not drink all the 7-Up. The bottles were donated by a customer at the nearby Walgreens, where Nguyen worked part-time until recently.

Nguyen’s yard was nominated for the City of St. Paul’s Blooming St. Paul award this year, despite the fact that his work is far from finished, he says. He’s planning to plant Scotch and Irish moss instead of grass in the front lawn and landscape with boulders.

By next summer, Blazing Star (liatris) will grow along the entire boulevard on Lexington to attract bees, butterflies and hummingbirds. In early August, when the Bugle visited his home, his yard was still black dirt, as he was in the process of trying to kill weeds without the use of herbicides.

We visited two other homes with interesting lawn ornaments. Meet Barbara Claussen and Carol Mulroy and their conversation starters.

If you wander down Summer Street in Lauderdale in the right season—when trees are bare—you may catch a glimpse of Barbara Claussen’s “Modern Monoliths,” seven red telephone booths tucked into Claussen’s wooded front yard.

Barbara Claussen and her “Modern Monoliths” Photo by Lori Hamilton

The phone booths—part of an installation piece that Claussen created in 2009 during her year working under a Jerome Foundation for Emerging Artist Fellowship—have been on sabbatical on Summer Street for nearly five years now, protected in plastic film and silent.

When “Modern Monoliths” was installed at the entrance to the 2009 Minneapolis College of Art and Design Jerome Foundation Fellowship Exhibit, at Tamarack Nature Center in White Bear Lake after that and on Hennepin Island during the 2011 Northern Spark, an all-night arts festival that takes place in June, the piece was interactive. The work examines the role of language in constructing hierarchies of power, Claussen said. Inside each booth three different voices articulate three ways that power has been historically perpetuated: force, reward and persuasion. The automated voices repeat phrases to observers over and over: “Come in. Join us. We’d love to have you. We will reward you. We will use force.” A fourth voice whispers warnings to the viewers: “Be careful.”

Claussen had stored the work in her garage before moving it out to her yard. It’s a good conversation piece when passersby stop to look, she said. “Modern Monoliths” examines the borders between public and private space, Claussen states on her website (www.barbaraclaussen.com). Eventually the artist would like to move the work to a more permanent place, out of her private yard and into a public arena.

Not exactly across the pond, but just down the road from “Modern Monoliths” another telephone booth has sprouted. Carol Mulroy’s bright green Irish “telefon” booth on Gibbs Avenue in St. Anthony Park was a community project that involved many nearby neighbors.

Carol Mulroy (second from right) and her neighbors pose with the Irish “telefon” booth in her front yard in St. Anthony Park. With her are Ram and Devi Rana (left) and Jeanne St. Clair (far right), all of whom helped her with the project. Photo by Kristal Leebrick

The brainchild of Mulroy’s friend Michael Cunningham of Falcon Heights, the booth and the landscaping surrounding it included the work of Ram and Devi Rana (Ram is a stonemason) and master gardener Jeanne St. Clair.

The project began after a large pine came down in Mulroy’s yard. She had mentioned to Cunningham that she had a large empty space in her yard to fill.

Cunningham came up with plans for the booth, which has a bench inside and books, things that could encourage neighborhood children and adults to sit inside and read. The booth is made from salvaged materials, including four French doors. Cunningham had help from his brother, Ram Rana and Rana’s father and four brothers in setting up the booth in the yard. The Rana family then installed a winding stone path leading to the booth.

Mulroy says the booth is indeed a conversation piece and a great way to meet more neighbors.